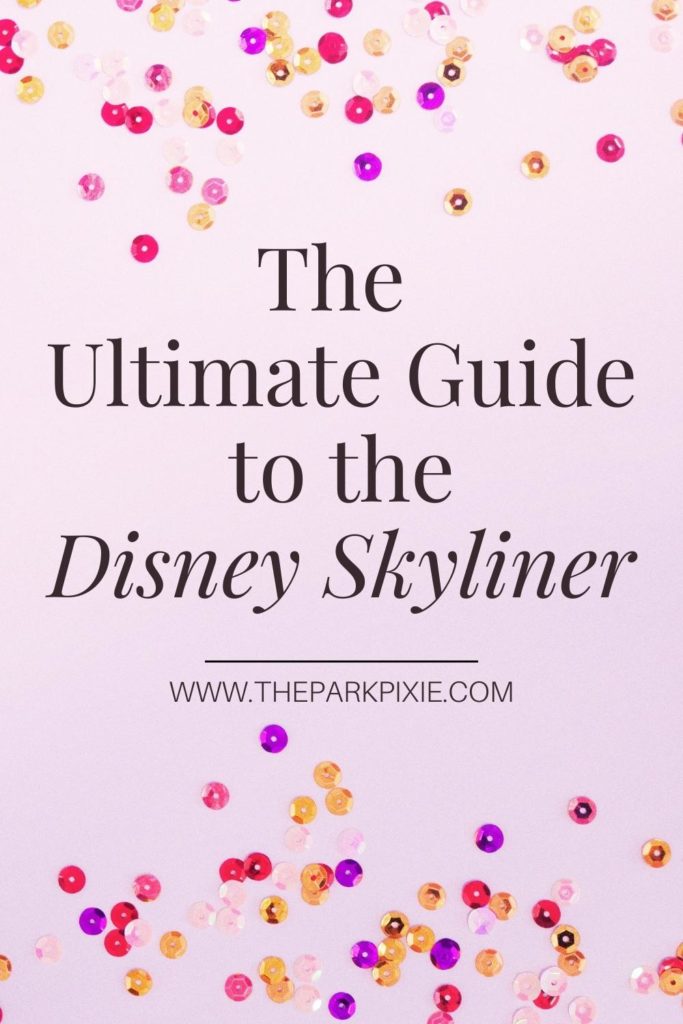 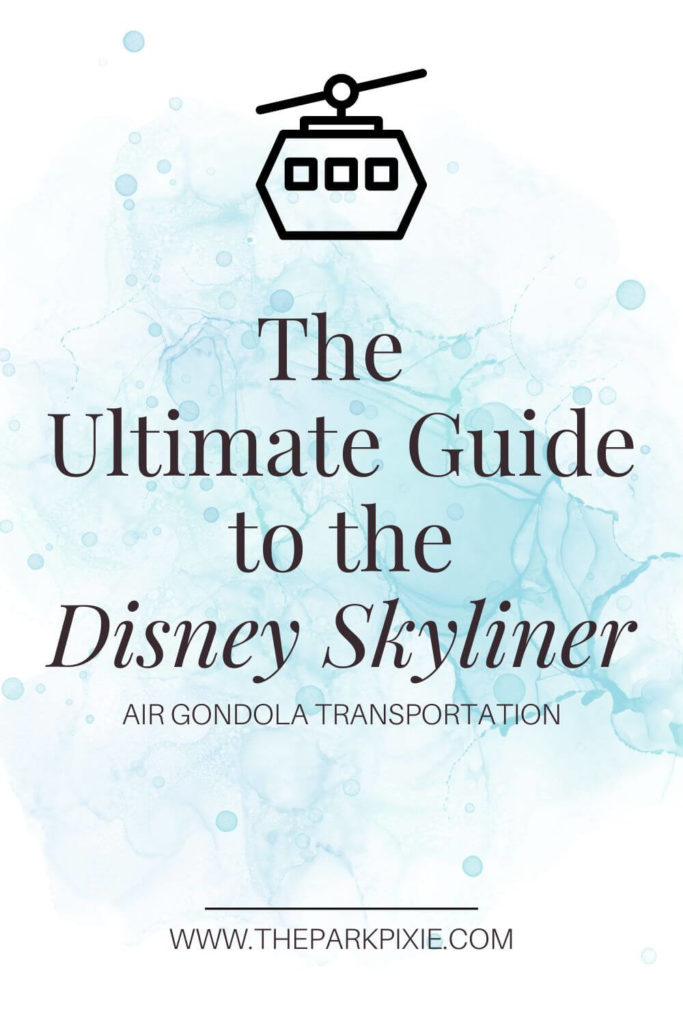 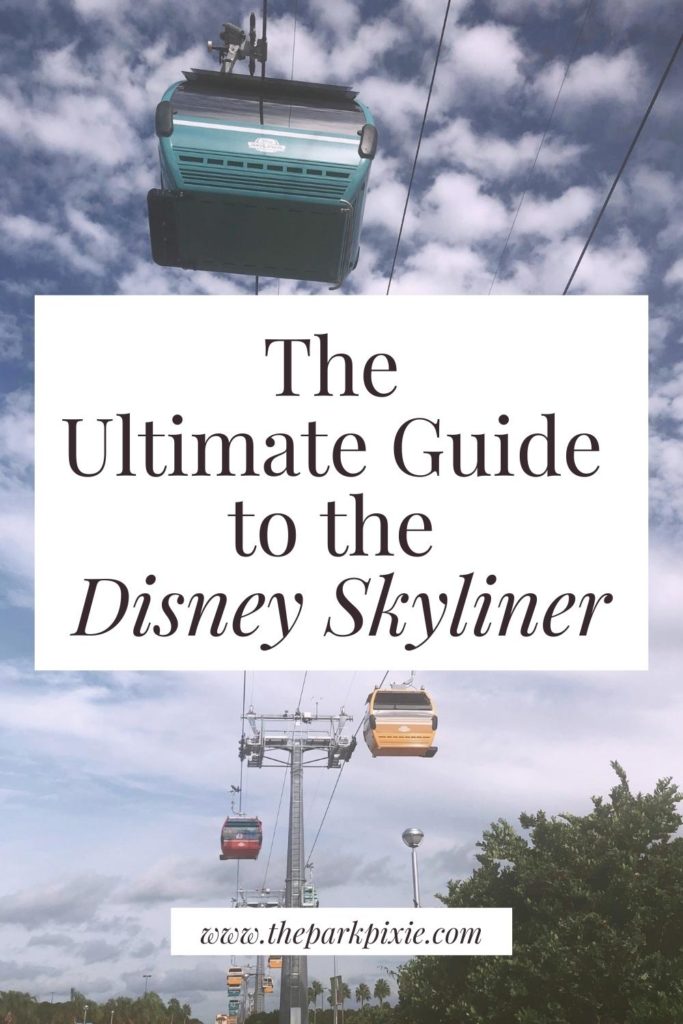 With many travelers coming flying in from outside the Orlando area, the Walt Disney World Resort smartly includes multiple forms of transportation between its parks, resorts, and entertainment areas so guests don’t have to rent a car. Its newest form of transportation is the Disney Skyliner.

In this guide, I’ll teach you everything you need to know about the Disney Skyliner, so you can navigate your way to and from like a pro before your vacation even comes around!

What is the Disney Skyliner?

The Disney Skyliner is an aerial gondola transportation system that runs between several parks and resorts at Disney World. It started operations on September 29, 2019.

Each brightly colored gondola seats up to 10 people, with many themed after a Disney character or attraction.

The gondolas are not air conditioned, but include vents designed to encourage a breeze.

What routes are available?

The Disney Skyliner consists of 3 lines that connect 5 stations between 2 parks and 4 resorts.

The routes run to and from, as follows:

All 3 routes connect at the Caribbean Beach Skyliner station, so you can transfer there to board another line if it’s not your ultimate destination.

While that might seem small, the Epcot stop is located within walking distance from Disney’s BoardWalk, the BoardWalk Inn & Villas, and the Yacht & Beach Club resorts.

The Disney Skyliner does NOT go to the following locations:

We went over a lot of information in the previous section, so let’s go over which Disney hotels on Skyliner routes are available. If you’re looking to stay on a Skyliner route, here’s where you want to stay:

In addition, the Epcot Skyliner stop is located within a reasonable walking distance from these Disney resort hotels:

Where are the Disney Skyliner stations located?

The Disney Skyliner stations are generally easy to locate since you can usually spot the gondolas floating through the sky and track them to a station.

Here’s a quick guide on where each station is located:

Art of Animation & Pop Century Skyliner station is located off of the bridge that spans between the 2 resorts, making it equally as easy to access regardless of which resort you’re staying at.

Epcot Skyliner station is located at the International Gateway entrance of Epcot. This is opposite the main entrance, between the World Traveler gift shop and France pavilion.

Hollywood Studios Skyliner station is located in front of the main entrance. You can’t miss it!

How to ride the Disney Skyliner system

Riding the Disney Skyliner gondola transportation system is super easy! It is completely free and does not require a theme park ticket.

Just head to the nearest station and get in line! A cast member will direct you onto a car when it is your turn to board.

If you’re curious about wait times before getting in line, check out the My Disney Experience app, which shows wait times, just like rides at the theme parks!

Is the Disney Skyliner faster than the bus or monorail?

Most of the time, the Disney Skyliner is faster than the bus or monorail when connecting between the same resorts or parks.

A huge benefit is that it doesn’t have to deal with the horrific traffic on the roads in the surrounding Disney area.

That said, just like on the road, there can be traffic jams and breakdowns, too.

In general, here are the estimated times for each connecting station:

Will more stops or routes be added?

As of December 2022, Disney hasn’t announced plans to expand the Skyliner.

Many fans and Disney experts love to speculate potential expansion plans. Keep in mind that they are all speculation and rumor!

What are the hours of operation?

The Disney Skyliner hours of operation vary. But generally they run 30 minutes to an hour before Epcot and Hollywood Studios opens and around an hour after they close.

The hours change throughout the year, so it’s always best to check with a cast member at one of the stations, connecting resorts, or connecting parks.

Can you ride the Disney Skyliner for free?

Yes, you can ride the Disney Skyliner for free. Not only is this fun form of transportation free, but you don’t need a park ticket or dining reservation to ride it either.

Is it wheelchair and scooter friendly?

Yes, the Disney Skyliner is wheelchair and scooter friendly.

There is a separate line to board, as the gondolas don’t actually stop, but the ones on the separate line stop to allow safe boarding.

Is it stroller friendly?

You don’t have to fold up the stroller and kiddos in the stroller can stay put. Music to a sleeping toddler or infant parents’ ears!

People with strollers must board using the same line as wheelchairs and scooters to ensure safe boarding.

What else do I need to know about the Disney Skyliner?

I think that covers it for everything you need to know about the Disney Skyliner!

If you have any questions, drop them in the comments below and I’ll be sure to answer them.

Next up, check out more of my top Disney World vacation planning guides: