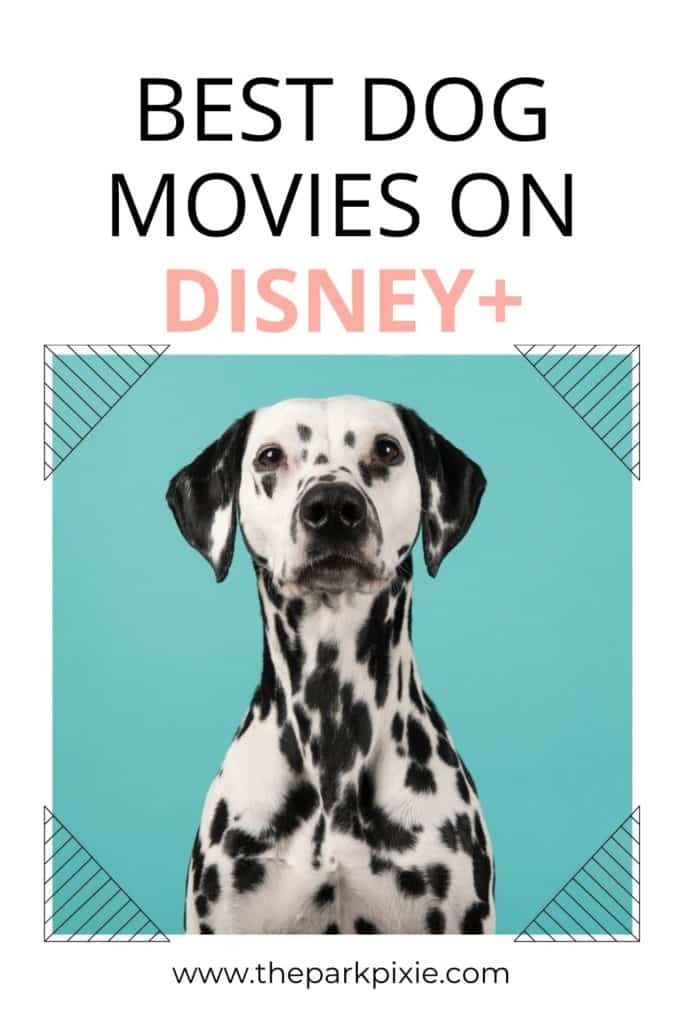 Dogs are loyal and loving creatures that make wonderful pets. So it’s no wonder that Disney has made many movies over the decades with pups as the stars!

And now, with Disney+, you can stream your favorites with your subscription or free trial.

Check out this list of the 45 best Disney dog movies on Disney Plus – plus 1 show featuring pups that I hold close to my heart.

In this movie, Lady, a posh cocker spaniel, falls in love with Tramp, a stray mutt.

This animated film is known for the iconic scene where the 2 dine on spaghetti in an alley next to an Italian restaurant, where they both accidentally slurp the same noodle, nearly kissing. So cute.

This delightful live-action remake of the classic animated film is a Disney+ original movie with a modern twist compared to the original animated film.

Many of the dogs are voiced by some of today’s top entertainers, such as Justin Theroux, Tessa Thompson, Sam Elliott, and Janelle Monáe.

This classic film is a heartbreaking tale about 2 young boys who encounter a stray dog, Old Yeller, who ends up having a massive impact on their life despite it not exactly being love at first sight.

This quirky film follows Wilson Daniels, a mail carrier who often clashes with dogs, and his son, Wilby, who magically turns into a shaggy sheepdog!

The only way he can turn back to human is by doing something brave.

Oh and there’s a subplot about international spies, too, which is just so ’50s!

Set in Scotland, Greyfriars Bobby, is based on a true story of a terrier pup named Bobby and his best friend, Old Jock, a shepherd.

One of Disney’s animated classics, this film features notorious villain Cruella de Vil, who steals all the Dalmatian puppies in London – for the cruel purpose of making a Dalmatian fur coat.

Pongo and Perdita, 2 Dalmatian parents whose 15 pups were stolen, lead the pack in rescuing the stolen puppies before it’s too late.

This live-action remake follows the same story as the original 1961 animated classic. It stars Glenn Close as the ultimate villain, Cruella de Vil.

Based on the novel of the same name, 3 pets, Bodger (a English Bull Terrier), Luath (a Yellow Lab), and Tao (a Siamese cat), cross the Ontario wilderness to find their family, who has left them in the care of a young bachelor.

In this remake of The Incredible Journey, 3 pets, Chance (an American Bulldog), Sassy (a Himalayan cat), and Shadow (a Golden Retriever), set off on an adventure through the Sierra Nevada mountains, to find their humans, who have left them in the care of a friend.

Jack Crandall, a helicopter traffic reporter, discovers that his dog and partner, a St. Bernard named Barabbas, has stolen a pricey necklace from jewel thieves.

A young boy, Lonnie, and his friend, Text, train a bumbling dog into a champion bird dog, much to the surprise of Lonnie’s dad, who is a dog trainer.

This adorable buddy movie centers around an unconventional friendship between a hound dog named Copper and an orphaned fox named Tod.

Copper and Todd’s odd friendship causes some clashes as they get older, leading to a showdown where they must decide to protect one another or protect themselves.

This dog movie on Disney Plus is one of my childhood favorites, so much so, I convinced my grandfather to name one of his cats Copper!

After his dog, Sparky, passes away, Victor is determined to bring him back to life – at any cost.

Tim Burton’s animated take on the 1980 live action film by the same name.

In this movie, Benji, a canine actor, and his trainer are in a boat accident that separates them.

Benji makes his way to shore to a rugged area that he must cross to get to safety, adopting cougar cubs along the way.

NOTE: There are multiple Benji films, but this is the only one produced by Disney, so the others aren’t likely to be added.

Dodger, along with human thief Fagin, is the lead of a stray dog street gang that scams and steals to get by.

Dodger reluctantly takes Oliver in after he proves his worth in one of Dodger’s shakedowns.

After a scam goes wrong that leads to Oliver being adopted by a wealthy family, the gang conspires to kidnap and hold him for ransom.

Will he make it back to his new cozy home and owner, Jenny, or will he be stuck in a life of struggles? Watch to find out!

Oliver & Company was another one of my favorite Disney dog movies that inspired one of my childhood pets’ name – a gray striped cat named Oliver.

This movie centers around Jack, a teen who sets off to accomplish his late father’s dream of striking gold in the wilderness of Canada.

During his journey, Jack encounters a wolf-dog, White Fang, who he tames and befriends despite his fear and the 2 brave the wilderness together.

Inexperienced guide Will enters a sled dog race in an attempt to win $10,000 to save his family farm after his father’s death leaves the family financially devastated.

In this 90s movie, a young teen named Angus and his dog fall overboard during a storm while sailing with family. They reach shore in a remote area and only have each other to survive. Will they make it?

One of the most iconic dog movies on Disney Plus from the 90s is this movie right here.

Goofy embarks on a road trip with his son, Max, who, like a typical teen, is embarrassed by his Dad’s goofiness.

Will their trip mend their bond?

A dog psychiatrist, Jack Morgan, learns he can read the mind of one of his canine patients, Lucky, whose rich owner recently passed under suspicious circumstances.

Morgan ends up helping Lucky to find out what really happened to his owner.

In this Disney Channel original movie, Jay, who is competing for a scholarship, has his speech confiscated by the school headmaster. The headmaster’s son then uses Jay’s speech to win the scholarship for himself.

But, Jay decides to fight back, so he steals his speech back in order to prove the speech was actually his.

However, the headmaster’s wife’s show pup, who is quite the handful, follows him home.

When an investigation into the missing pup starts up, Jay must figure out how to make things right again.

A dentist from Miami receives a mysterious inheritance – but there’s a catch. In order to receive it, he must move across the country, all the way to Alaska, and compete in a dog sledding race.

In this movie, pre-teen Calvin desperately wants to buy a rare comic book, but doesn’t have enough money.

After hearing about show dogs from a neighbor, he decides to adopt a dog to enter into a show with a $5000 prize. But the only pup left at the pound is a ruff-and-tumble mutt.

Will Calvin and his mutt win the top prize??

One of my favorite dog movies on Disney Plus is Eight Below. It’s a tearjerker, but definitely worth a watch.

After a snowstorm approaches Antarctica, Jerry (Paul Walker), a sled dog guide, is forced to leave his dogs. The rescue pilot promises to return to retrieve the dogs, but ultimately isn’t able to.

Unfortunately the storm prevents the immediate return and conditions are too bad to return.

Jerry makes it his mission to return to Antarctica to rescue his 8 dogs, but is unable to raise the financing to return. Will he make it back in time to rescue them?

A beagle, Seashine, finds out he has superpowers after an accident in a mad scientist’s lab. Seashine must save the day when he discovers the mad scientist is plotting to destroy their city.

This film focuses on Bolt (John Travolta), a pup/actor who thinks he’s a superhero because he’s played one on TV his entire life!

One day Bolt is separated from his owner and co-star, Penny (Miley Cyrus), and accidentally sent across the country to NYC.

In his journey to make his way back to Penny, who he thinks is in danger after filming a scene where she is kidnapped, he discovers the truth about his super powers.

In this cutesy film, Chloe, a posh Chihuahua from Beverly Hills, gets lost in Mexico while on vacation with family.

Enter Papi, a rough-and-tumble chi, who has a crazy crush on her and resolves to rescue his damsel in distress.

Will he pull it off? Will Chloe finally realize Papi’s love for her? Watch to find out!

In this adorable live-action Christmas movie, Santa visits New York City with his dog, Paws, to visit his holiday ambassadors.

The 2 become separated after an accident that leaves Santa with amnesia. After wandering the streets, Paws crosses paths with an orphan, Quinn, who is stuck in an abusive orphanage for girls.

Will Santa regain his memory? Will the girls be saved from their miserable situation? Watch to find out!

The 2000s were jam-packed with Disney dog movies, such as Super Buddies, and the other “Buddies” films. Most of them are available on Disney+ or will be this Fall.

In this installment, the fab 5 dog buddies become secret superheroes and must save the planet from an alien force.

Based on a true story, an epidemic strikes a super rural town in Alaska. The cure is 600 miles away, across treacherous terrain.

Dogsled trainer Leonhard Seppala, sets off in stark conditions with his top pup, Togo, leading the pack, in a quest to retrieve the only medicine that can save his town.

Original to Disney+, Pick of the Litter is a docuseries television show that follows pups being trained to become service dogs for the visually impaired.

My grandmother is blind and had many guide dogs up until her 80s. As soon as I found this show on Disney+, I immediately added it to my watch list!

Service dogs are often a lifeline that give people who are visually impaired, disabled, or severely ill, independence.

Without these magnificently trained pups, they might not be able to live as fully and independently as they do.

I feel so fortunate to have grown up witnessing how life changing a service or guide dog can be.

If you’re interested in learning more about these working pups, Pick of the Litter is a great place to start.

What are your favorite Disney dog movies on Disney Plus?

No matter which dog movie on Disney Plus is your favorite, I’m sure you’ll agree they’re all pretty great!

For more ideas on what to watch, check out these posts:

The Best Disney Easter Movies on Disney Plus • The Park Pixie

[…] more ideas on what to watch on Disney+, check out Disney Dog Movies, Romantic Disney Movies, and Disney Halloween […]