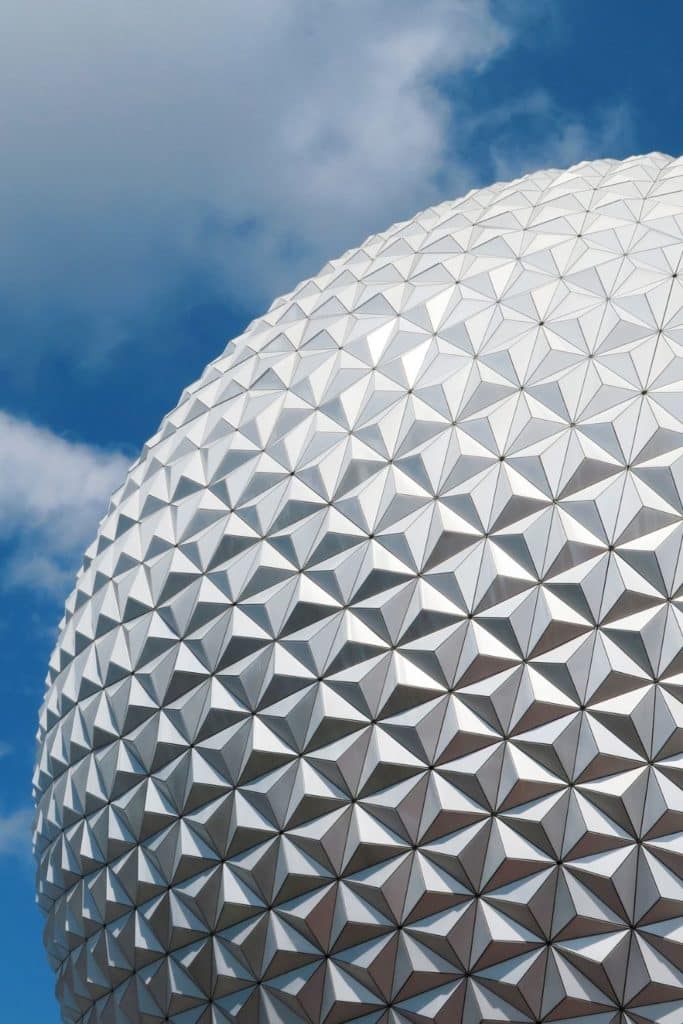 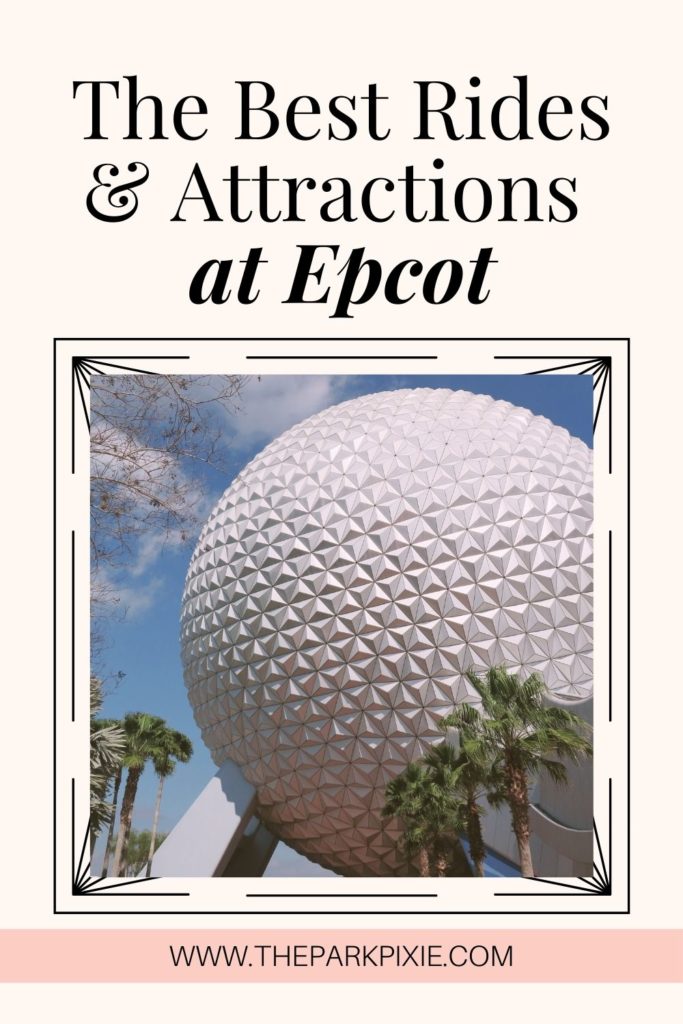 As an avid traveler, Epcot has always been one of my favorite theme parks at Disney World.

Many visitors write it off as boring or not worthy of a full day’s exploration, but that couldn’t be further from the truth.

If you’re not sure what to do at Epcot, I’m here to help.

In this post, I’ll outline the best Epcot rides and attractions, explain a bit about the best rides, and tell you whether they’re worth reserving on Genie+.

To learn more about the FastPass program, as well as how it works at Epcot, check out my post on FastPass secrets and tips.

The FastPass program was recently replaced with Genie+ and Lightning Lanes.

Check out each ride below to see if I recommend accessing the Lightning Lane so you can decide if it’s worth getting Genie+ or individual Lightning Lane passes.

You can also learn more about this new system in my Genie+ & Lightning Lane Guide.

First up is the iconic Spaceship Earth, affectionately known as the “Epcot ball ride.”

On Spaceship Earth, guests ride through the history of communication and technology, from cave paintings to the internet and beyond.

Journey into Imagination with Figment

In this slow ride, guests learn about the 5 senses: sight, smell, sound, taste, and touch.

The ride is hosted by a purple dragon named Figment, who is a cult-favorite among Epcot fans.

So much so that when the ride was ‘reimagined’ in the late 1990s with barely any role for Figment, there was a ton of backlash from guests.

The backlash caused the ride to close after just 2 years so it could be reimagined again.

Journey into Imagination with Figment reopened in 2002 with everyone’s favorite purple dragon properly restored as mascot and host of the ride.

This slow boat ride takes guests through a Frozen-themed journey in the dark, complete with familiar tunes and your favorite Frozen characters, like Anna, Elsa, and Olaf.

Frozen Ever After opened in 2016 and replaced Maelstrom, which was themed around Norway’s viking era.

This ride has proven to be quite popular and is set to be rebuilt at 3 additional Disney theme parks around the world: Hong Kong Disneyland, Tokyo DisneySea, and Walt Disney Studios at Disneyland Paris.

In this Epcot ride, guests create their own concept car, and then test a simulation car based on their build.

Your car is tested in varying weather conditions, hills, speeds, and more. With a different ride possible nearly every time, it’s clear why Test Track is an Epcot favorite.

On Mission: SPACE, guests can choose between 2 missions, each with a unique experience. It’s kind of like 2 rides in 1!

The Orange mission simulates a mission to Mars. It is super duper intense and hits up to 2.5G force.

After riding the Orange mission once, I swore I’d never ride again – and I haven’t.

That’s not to say others shouldn’t ride it as well, but if you have any kind of health condition, don’t. Otherwise, have at it – it’s unlike anything I’ve ever experienced!

That said, in 2017, the Green mission was added, which simulates an orbit around Earth. It’s far less intense, but still thrilling!

Living with the Land

In this slow boat ride, you learn about the history and future of agriculture.

The best part is the behind-the-scenes look through a working greenhouse at Disney World.

It’s so cool to see the different fruits, vegetables, plants, and fish (yes, fish!) that are grown at Disney World and used at their restaurants.

In Turtle Talk with Crush, guests have a chance to chat with Crush, the surfer dude-like turtle from Finding Nemo.

This attraction is super cute and fun to watch – plus there’s air conditioning and a chance to rest your feet.

It’s excellent for kids, especially younger ones who will be mesmerized by Crush interacting with them.

Turtle Talk with Crush has done so well that it has since been duplicated at Disney California Adventure, Hong Kong Disneyland, Tokyo DisneySea, and the Children’s Hospital of Orange County.

Yes, that’s right – it’s also at a California hospital that was co-founded by Walt Disney himself!

Soarin’ Around the World

My favorite of all the Epcot rides: Soarin’ Around the World!

In this ride, guests board a flight simulator ride that takes them around the world to places like the pyramids of Egypt, the eiffel tower in France, and Kilimanjaro National Park in Tanzania.

Soarin’ was initially implemented at Disney California Adventure in 2011 and took guests through different landscapes of California.

The same experience opened at Epcot in 2005. The current ‘Around the World’ experience debuted in 2016 at Epcot and Disneyland.

Similar versions of Soarin’ Around the World can be found at Shanghai Disneyland and Tokyo DisneySea.

In this ride, guests see what it’s like to be the same size as Remy (the rat of our dreams 🎶) as they are chased through Gusteau’s restaurant.

This ride first debuted at Walt Disney Studios Park at Disneyland Paris in 2014.

Guardians of the Galaxy: Cosmic Rewind

Although it just opened in 2022, Guardians of the Galaxy: Cosmic Rewind is becoming one of the most popular rides at Epcot.

It is available via virtual queue, rather than a regular standby line. Personally, I’m a fan of virtual queues, so I hope this sticks and isn’t just part of the opening rollout.

Guardians of the Galaxy: Cosmic Rewind was originally supposed to open around Disney World’s 50th anniversary celebration in October 2021. However, its opening was delayed to May 27, 2022.

It is the first Marvel ride at Disney World, as well as the first roller coaster at Epcot.

Not all rides and attractions at Epcot are available with Genie+ and very few are available for purchase as an individual lightning lane.

Check out the table below to get a full list of each attraction and ride that is available with Genie+, as well as which ones are available for purchase as an individual lightning lane pass.

*Frozen Ever After is only available with Genie+ until August 7, 2022. After that date, it will only be available as an individual Lightning Lane pass.

Epcot has historically been more of a learning experience, with many galleries, interactive play spaces, and films making up the bulk of attractions.

However, over the years, Epcot has expanded to include some of my favorite rides at Disney World.

For a full list of Epcot rides and attractions sorted by the 4 neighborhoods, World Celebration, World Nature, World Discovery, and World Showcase, see below.

The following rides and attractions are available in World Celebration:

The following rides and attractions are available in World Discovery:

The following rides and attractions are available in World Nature:

There are no rides or attractions at the Italy, Germany, or UK pavilions. These World Showcase pavilions consist primarily of gift shops and restaurants – but perhaps in the future, that will change.

Occasionally you’ll find character meet-n-greets nearby, as well as musicians or other entertainers.

As for the rest of the pavilions in the World Showcase, here’s what you can find for rides and attractions:

What are your favorite Epcot rides and attractions?

I hope you have a great day at Epcot!

Leave a comment below and let me know what your favorite Epcot rides and attractions are.

For more tips on planning your days at Disney World, check out my posts about the best attractions and rides at the other parks.

Where to Get Starbucks at Disney World • The Park Pixie

The Absolute Best Rides at Hollywood Studios • The Park Pixie

The Best Magic Kingdom Rides and Attractions • The Park Pixie

[…] forget to pop over to my post about the best Epcot rides and attractions to plan your day there, […]