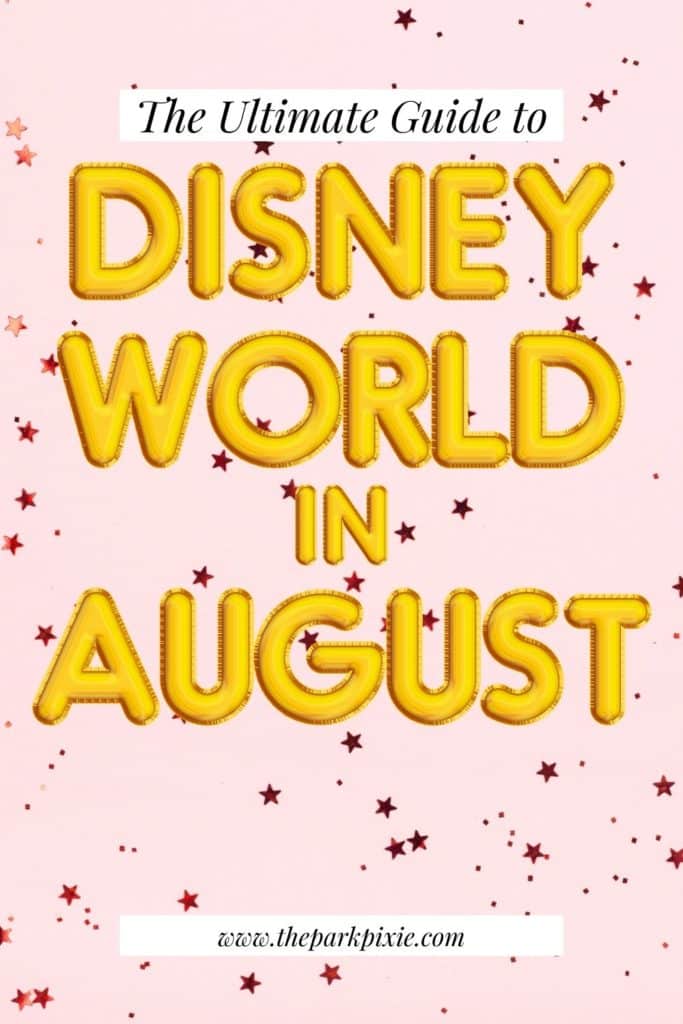 If August is on your radar for your trip to Disney World or you’ve already booked your trip for August, use this monthly guide to plan your itinerary.

In this post, I’ll go over everything you need to know about Disney World in August, such as what to expect with the weather, special events to consider, what the crowds are like, what’s new, and what’s closed.

Weather in Orlando in August

The Orlando area in August is just as hot, humid, and rainy as it is in June and July.

According to Visit Orlando, the average high temperature is 92° F and average low is 74°.

So, in other words, hot and sticky.

It’s also still hurricane season in August. While that doesn’t mean Disney World will get hit with a hurricane, which is rare due to its central location inland, it does mean rain – lots of it.

August is the 3rd-rainiest month in the Orlando area with an average of over 7 inches of rain (source).

Afternoon rain showers are common, though they often only last about 20 minutes, give or take.

What to wear to Disney World in August

As with the other Summer months, I recommend light-colored, loose clothes to help prevent you from overheating.

As for shoes – I always say, do what’s best for your feet.

I prefer sandals, like Birkenstock slides, over sneakers because I HATE when my feet get hot and stuffy.

But, many people feel they can’t keep up with all the walking unless they wear sneakers.

I highly recommend taking sunglasses, sunscreen, and a disposable rain poncho to the parks with you.

The Florida sun can be brutal, as can the rain, so it’s a good idea to be prepared for both!

For more tips on what to pack for Disney World, check out my Disney World packing list post.

My Disney World packing guide comes with a FREE printable packing list to help you stay organized while packing for your trip.

Yes – there are tons of events at Disney World in August, plus several movie releases.

In 2021, Disney replaced Mickey’s Not-So-Scary Halloween Party, a ticked after hours event at Magic Kingdom, with the Disney After Hours Boo Bash.

It’s not clear yet if this is a permanent change or solely meant to be a scaled-down event as Disney moves back to normal post-COVID.

The Disney After Hours Boo Bash runs on select dates, although as of last update, the 2022 dates are not yet available.

Crowds at Disney World in August

The first half of August still sees considerable Summer crowds, but the second half quiets down a little bit as many US schools are back in session by then.

If you’re a family with children and limited choices of when you can visit, the second half of August is slightly better than June or July crowd-wise.

So if your schools aren’t in session until the first week of September, I’d go with August if I were you.

There are several rides and attractions that are closed without reopening dates. It’s also possible that more closures will be announced as we move through the year.

There are a number of shows and attractions at Hollywood Studios that are still closed due to the pandemic.

Reopening dates are not available for any of these as of last update:

Several attractions and experiences at Magic Kingdom are closed in August.

The Magic Kingdom attractions and experiences closed are:

Will you visit Disney World in August?

I’ve visited Disney World in August in the past and despite the miserable heat and humidity, I still enjoyed my vacation.

Are you planning to visit in August or have you done so in the past? Let’s chat in the comments.

Disney World in September: Everything You Need to Know • The Park Pixie

[…] The Orlando area in September is just as hot, humid, and rainy as it is in July and August. […]