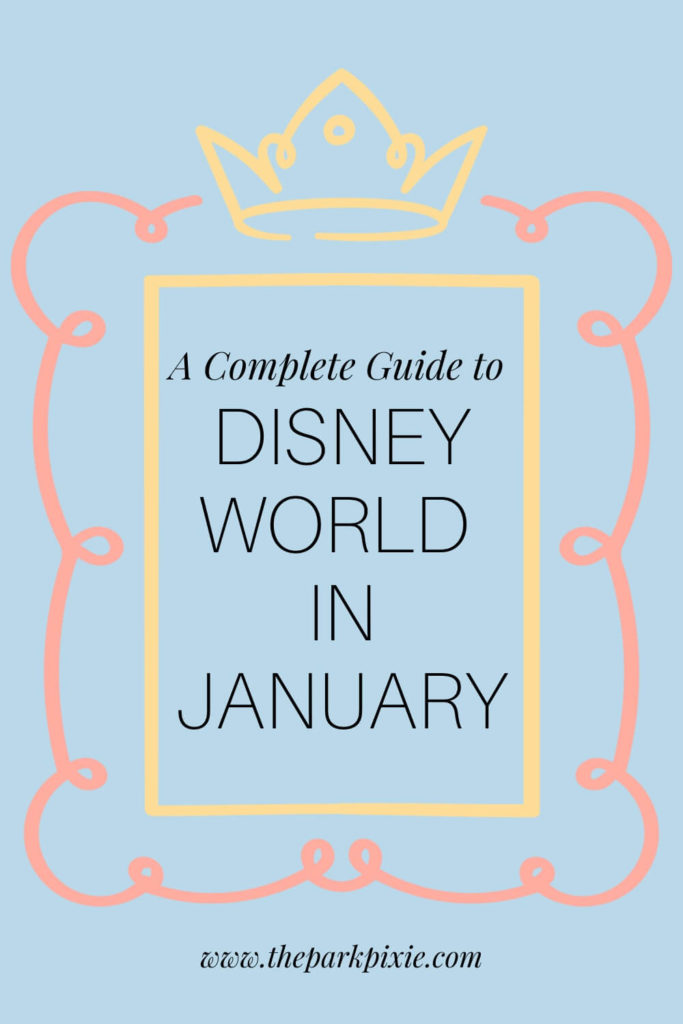 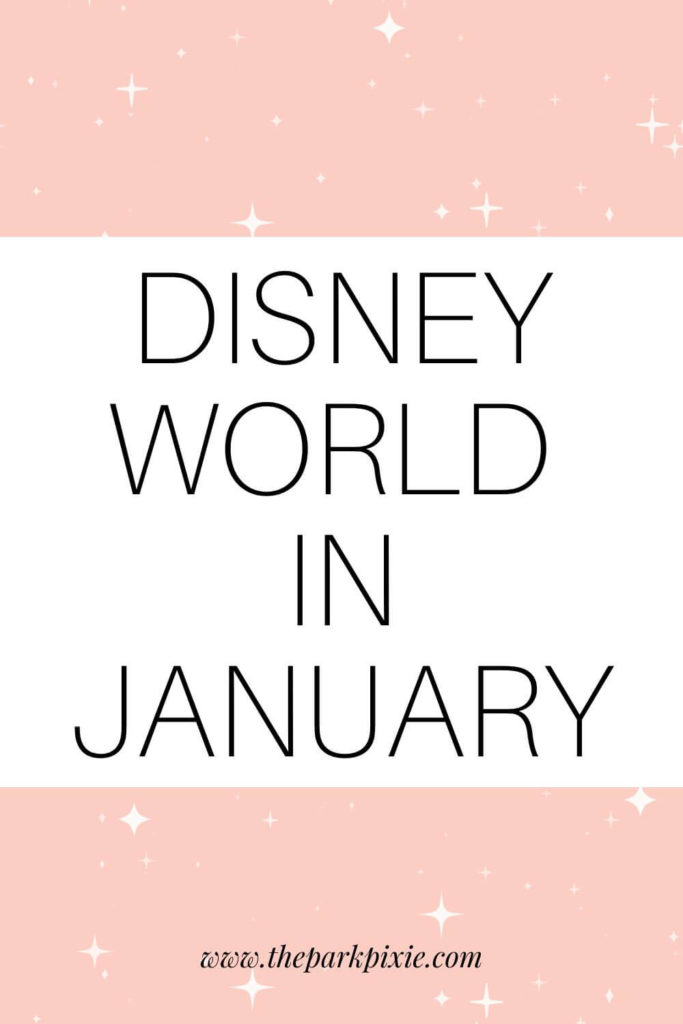 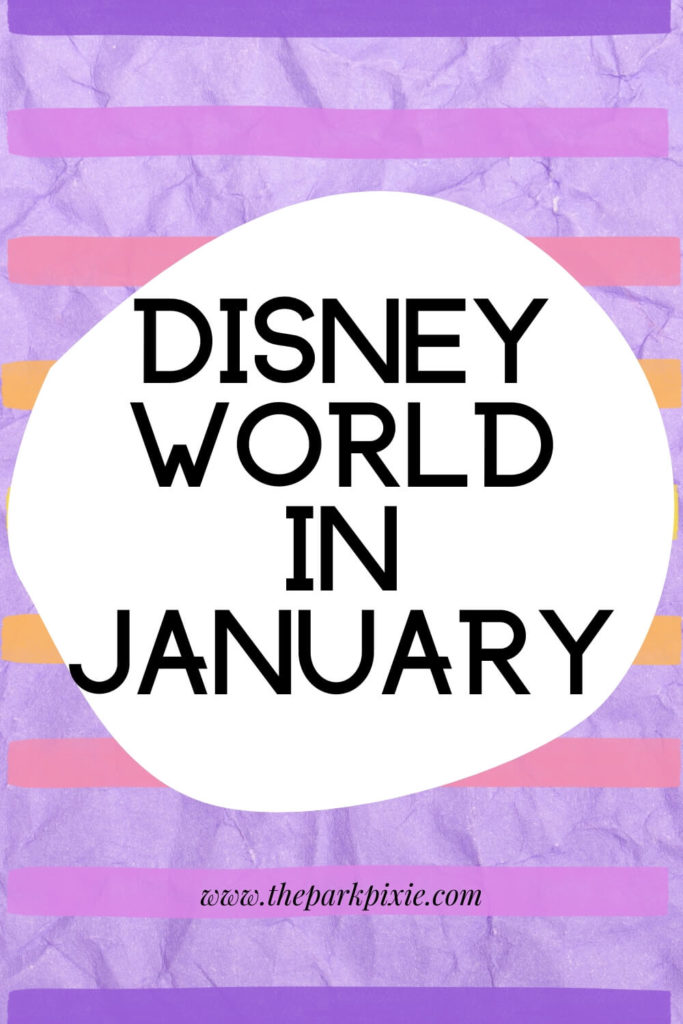 The holiday season is over and it’s a new year filled with lots of opportunities to visit Walt Disney World Resort in Florida!

Fantasmic! and the Walt Disney World Railroad are finally back in action.

Plus, the TRON Lightcycle / Run roller coaster and Moana: Journey of Water attraction are both set to open later in 2023.

It’s gonna be a great year, not just a good year, my fellow Disney friends!

If you’re looking to book a trip to Disney World in January, be sure to go through this guide to ensure it’s the best time for your visit.

Or if you’ve already booked, take not of what’s closed, plus any special events going on.

Keep reading for my guide to Disney World in January, including weather, what to wear, crowd predictions, new attractions, closures, events, and more.

Weather in Orlando in January

January is usually the chilliest month in the Orlando area, with an average high of 71° F and low of 49° F (source).

The January weather is also dry – by Florida standards, anyway – with an average of 2.35 inches of rain (source).

As a New Englander, this weather sounds absolutely sublime to me! No sweaty, sticky days and less chance of rain? I’ll take it!

If you hate the sweltering humid weather, January will be a great time to visit for you, too.

What to wear to Disney World in January

Given the cooler temperatures, it’s important to pack layers when visiting Walt Disney World in January.

For many, low 70s or even high 60s is still shorts and t-shirt weather, while others will need a winter jacket.

You know your tolerance of temps the best, but given how erratic Florida weather can be, I do recommend packing warm and cold outfits!

For me, I usually stick to jeans and t-shirts this time of year, with a warm layer that I can easily throw on or take off.

And while I’m almost always in Birkenstock sandals at Disney, you’ll likely find me wearing sneakers instead. I hate when my feet are cold!

In short: t-shirts, jeans, shorts, sweatshirts or a light jacket, sneakers, and hats are all great picks for what to wear to Disney World in January.

Although the major holiday season is over, there are a number of special events in January 2023.

First up in January is New Year’s day, as well as 1/2, which is the federal holiday for New Year’s Day this year, both of which will no doubt result in some leftover crowds during the first week of January.

This rolls right into Walt Disney World Marathon weekend, which runs from January 4 – 8, 2023.

This runDisney race includes a 5K, 10K, half marathon, and full marathon race, plus a health and fitness expo, spread across 5 days.

Not long after the marathon weekend, the Epcot International Festival of the Arts starts on January 13. Martin Luther King, Jr. Day is Monday, January 16, which is a federal holiday.

That means lots of schools and work places will have that day off – resulting in slightly heavier crowds that the rest of the month weekend.

For tips about planning your visit to the Epcot International Festival of the Arts, check out my comprehensive guide.

Lastly, Splash Mountain closed on January 22 for its long-awaited makeover into Tiana’s Bayou Adventure. It is expected to reopen in 2024, but a date has yet to be announced.

Expect tons of crowds and lines at Magic Kingdom trying to get one last ride in before it changes over forever. Honestly – I haven’t been on Splash Mountain in years and can’t wait for the new ride.

How crowded is Disney World in January?

The crowds at Disney World ebb and flow throughout the month of January.

There are a few pockets where the crowds are nice and small. Combined with the lovely January weather, it makes for a blissful visit!

The winter months are often packed with ride and attraction closures either for refurbishment or due to cooler temperatures that would make water rides and parks unsafe.

Check out the lists below to see what’s closed at Walt Disney World Resort in January.

First up, at Disney’s Animal Kingdom, there are several closures to report.

From January 9 through mid-March, Kali River Rapids will be closed for its annual refurbishment.

The Colors of Mo’Ara face painting station in Pandora continues to be closed, but is expected to return someday.

Most of the character meet-and-greets at Animal Kingdom, mainly Pocahontas, Russell and Dug, and Lion King characters like Timon and Rafiki, are still on hold, as well.

That said, you can catch a glimpse of these characters, plus Scrooge McDuck, Launchpad McQuack and other characters, on boats that float along Discovery River while circling Discovery Island.

The bulk of the closures at Epcot in January include a few restaurants and shops.

Tokyo Dining in the Japan pavilion is closed for remodeling and expected to open at some point in Summer 2023.

The Brass Bazaar, Casablanca Carpets, Marketplace in the Medina, and Restaurant Marrakesh, all in the Morocco pavilion, also remain closed without a reopening date to look forward to. It’s so sad to see such a beautiful World Showcase pavilion with such limited offerings!

Der Teddybar in Germany, El Ranchito del Norte in Mexico, the Mitsukoshi Kiosk in Japan, Sportsman’s Shoppe in United Kingdom, the Trading Post between Canada and the United Kingdom pavilions, and Village Traders between China and Germany also remain closed.

At Disney’s Hollywood Studios, Jedi Training, Star Wars Launch Bay theater, including its shops and meet-and-greets, and Voyage of the Little Mermaid remain closed with no opening date yet announced.

The Citizens of Hollywood street show has also not returned, which is a bummer because it is always a riot!

From January 9 through January 27, For the First Time in Forever: A Frozen Sing Along will be closed for refurbishment.

The Neighborhood Bakery in Pixar Place, where you can get the delicious num num cookie and other tasty snacks at Hollywood Studios, also remains closed. Same goes for The Incredibles meet-and-greet.

There are several popular attractions closed at Magic Kingdom in January.

Splash Mountain closes on January 23 until an unspecified date in 2024 for its transformation into Tiana’s Bayou Adventure.

The Enchanted Tales with Belle show remains closed through January and part of February. It is scheduled to reopen on February 19. Until then, you can meet Princess Belle at this location.

There are several meet-and-greets that are temporarily unavailable with no return date yet:

Meet Ariel in her Grotto is currently closed but will reopen on January 22, 2023.

Next up are the water parks, Blizzard Beach and Typhoon Lagoon.

Disney’s Typhoon Lagoon Water Park is currently closed for refurbishment with no opening date announced as of early January.

Located next to Blizzard Beach is the Winter Summerland mini golf course, which features 2 courses: Summer and Winter.

In mid-January, Winter Summerland will start partial closure for refurbishments.

Disney has publicly stated that it will reopen, just like the Magic Kingdom location, but hasn’t announced a date.

Disney has not announced when either restaurant or their character experiences will return as of early January.

Lastly, the Disney Skyliner will be closed between January 22-29, 2023 for regular maintenance and refurbishment.

Will you visit Walt Disney World in January?

Overall, Disney World in January is one of my favorite times of year to visit, thanks to the lower temps and and easier crowd level to deal with.

Let us know in the comments below what your favorite time to visit Disney World is!

For more Disney World vacation planning tips, check out the posts below:

Epcot Festival of the Arts: A Complete Guide for 2023