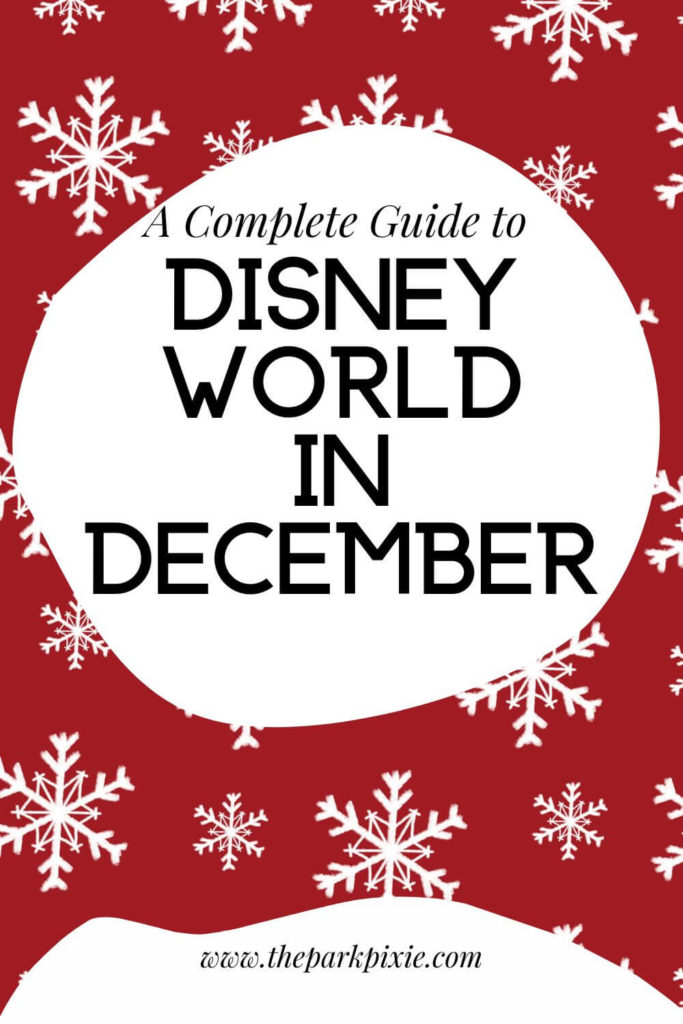 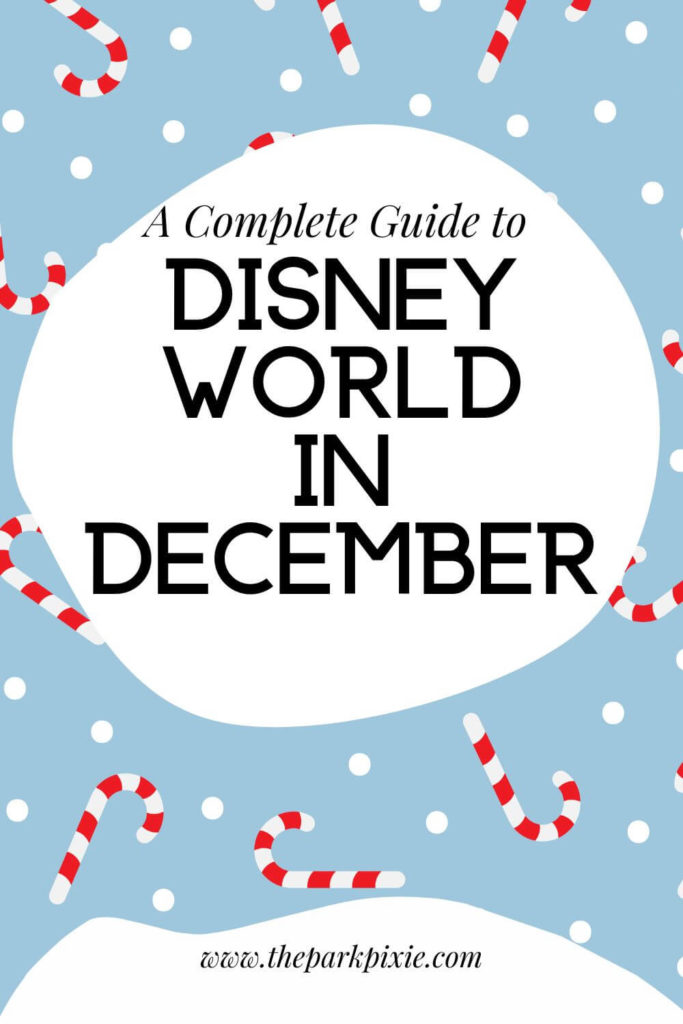 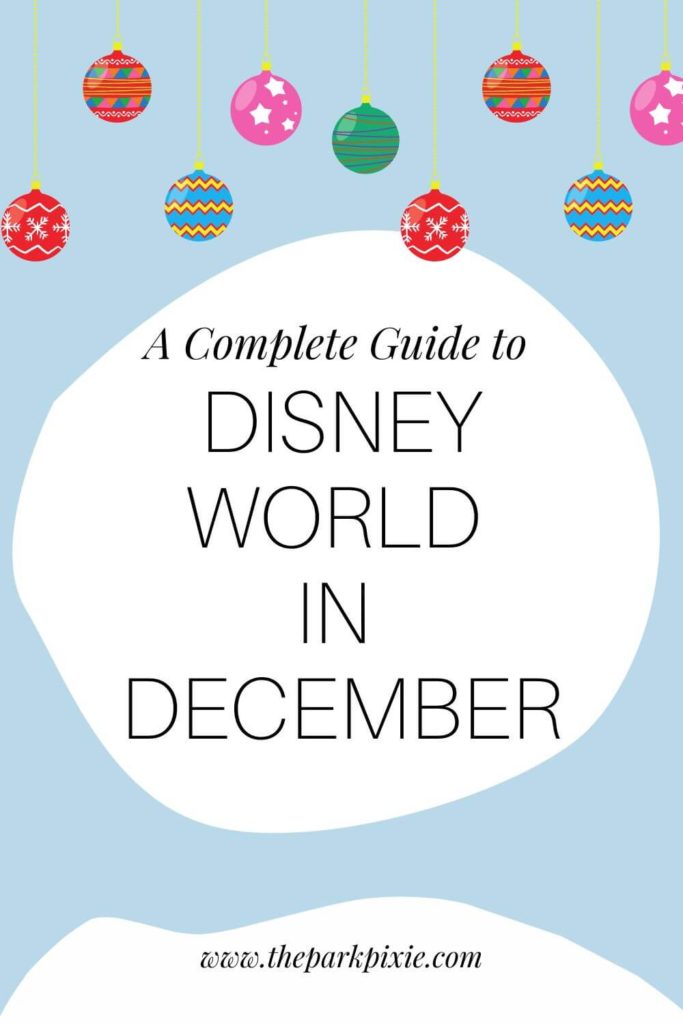 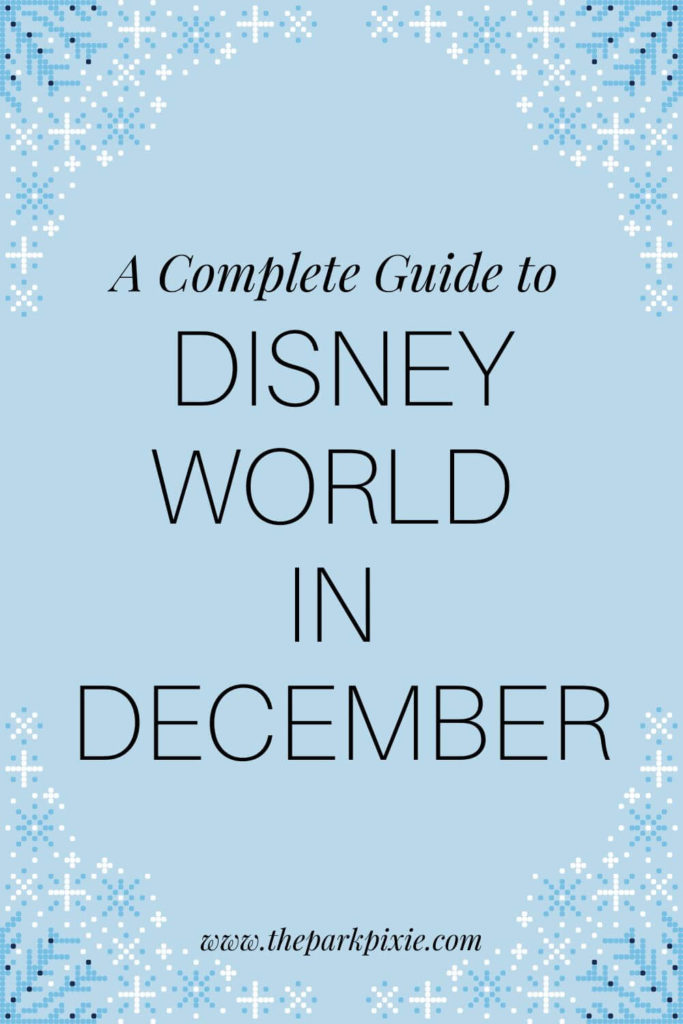 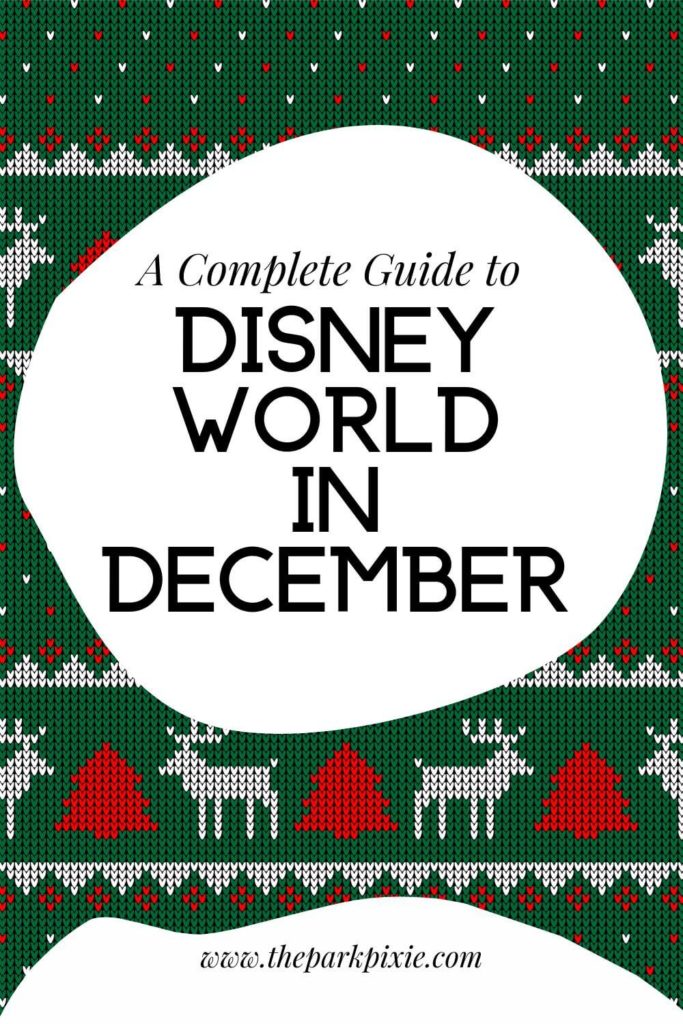 Visiting Disney World in December this year? This is one of my favorite times of the year to visit to soak up all of the holiday magic. I bet that’s why you’re going then, too, right?

Check out these tips for visiting Walt Disney World in December, from weather and what to pack to special events and attraction closures.

Weather in Orlando in December

December is one of the coldest months of the year in the Orlando area with an average high of 72℉ and average low of 54℉.

It’s also less rainy in December, with an average precipitation rate of 2.63 inches.

I love visiting Walt Disney World this time of year due to the much cooler temps and less rain!

What to Pack for Disney World in December

Given that temperatures have dropped considerably compared to Spring through Fall, packing some warm layers is definitely a must-do.

Now, that’s not to say that you should ditch the shorts and swimwear, but chances are high that there will be a few chilly days or nights. Or worse – a cold snap!

The last time I went to Disney World in December, I wore jeans every day and most nights I was fine with a t-shirt or long sleeves. I only needed a fleece jacket once and it was during the evening.

Then again, I’ve seen folks need sweatshirts or fleece jackets during the day for their entire trip.

It’s best to stay prepared and pack the extra layers, even if they do take up extra room in your suitcase.

Aside from making sure you pack for both ends of the temperature spectrum, get into the holiday spirit with some festive gear!

Maybe an ugly Christmas sweater for Mickey’s Very Merry Christmas party or plaid Minnie ears. Or how about a Mickey Santa hat?

For more tips, check out my guide on what to pack for Disney World, which includes a FREE packing list that you can download and print at home.

If you’re going to Walt Disney World resort this time of year, there are tons of events you’ll want to add to your itinerary.

Plus, the theme parks and resorts are decked out in festive decorations for the winter holidays. It is definitely a sight to see!

The Epcot International Festival of the Holidays runs all month and is definitely worth checking out, as well.

The festival includes lots of delicious holiday-themed food, including Christmas cookies, from around the world, as well as festive performances, sharing of holiday traditions, gift shopping, and of course – fun rides!

This even requires a separate ticket and gives access to a limited number of guests to the Magic Kingdom at night. It includes a special parade, a selection of free snacks and hot cocoa, a fun show, and lots of character meet-and-greets.

The best part, however, is shorter lines for popular rides, like Space Mountain, Big Thunder Mountain Railroad, Seven Dwarfs Mine Train, and Pirates of the Caribbean.

Lastly, parks are open on Christmas Eve and Christmas Day (December 24 & 25), as well as New Year’s Eve (December 31) and New Year’s Day (January 1). What a fun way to celebrate the holiday season!

Overall, the first half of the month is pretty blissful, crowd-wise, but the last half is the most crowded time of the entire year.

In fact, Christmas week is THE absolute busiest week, with Christmas on one end and New Year’s on the other.

The Christmas crowds are seriously no joke. My family and I visited during the last half of December one year and we had to get an escort one time to make it through the sea of people before our Fastpass expired (RIP Fastpasses!).

And I don’t say that to scare you! I definitely would go back again for Christmas and/or New Year’s. But I totally get that for some people, it just isn’t worth it, even for some extra magical holiday fun.

If you can’t stand the crowds, but want to see the Christmas decorations or attend one of the holiday events, go in the first half of the month.

Lastly, if you are going to visit during the last two weeks, book as early as you can.

Snag the resort you want to stay at and check off the advanced dining reservations once they open up 60 days ahead of the start of your trip.

Reservations for the parks get snatched up pretty quickly, especially for Christmas Eve, Christmas Day, and New Year’s Eve.

So if you want to visit a specific park on one of those dates, make your reservation as soon as possible.

Although December is the busiest time of the year at Disney World, it is not immune to ride and attraction closures.

As I write this post, it’s January 2023, so it’s possible that the below information will change throughout the year. Be sure to check back regularly for the latest scoop!

At Animal Kingdom, expect some of the in-person character meet-and-greets to still be on hold.

For the past few years, some of these meet-and-greets have been replaced by flotillas, or parade float-like boats that sail around the Discovery River with characters on them.

Here’s to hoping we’ll get to hug some of these friends again before the year takes a bow.

In addition to the characters, the face painting station in Pandora, Colors of Mo’Ara, has also been closed for some time. It’s very possible this will continue through the end of the year.

Hopefully by the time December rolls around, the handful of shops at Epcot that have been closed for a few years now will be reopened in time for gift shopping.

Especially at the Morocco pavilion, which is a shell of what it used to be.

The shops and restaurants that might still be closed are:

In addition, Village Traders between the China and Germany pavilions and Trading Post between the Canada and United Kingdom pavilions might also still be closed.

Hollywood Studios still has a good handful of attractions and shops that have been shuttered for a few years.

While some might end up being permanent, Disney still lists them as temporarily unavailable, so perhaps they’ll be back at some point in 2023!

Here’s a list of the attractions and shops that might still be closed at the end of this year:

At the beginning of the year, this list was longer but Disney has slowly been reopening meet-and-greets that have been closed for a few years.

The following meet-and-greets might still be closed at the end of the year unless Disney decides to finally reopen them:

Lastly, Splash Mountain is closed until late 2024 for a total makeover and will reopen as Tiana’s Bayou Adventure. I can’t wait for this Princess & the Frog attraction!

Sometimes Typhoon Lagoon or Blizzard Beach close for refurbishments around December or January.

At this time, neither has announced it will be closed during this month. However, they do close periodically throughout the year so it’s always good to check ahead if this is a must-do for your trip.

Given that the Magic Kingdom location reopened in 2022, I’m hopeful that this location will reopen before December. Unfortunately, Disney has been mum on a reopen date.

Will you be visiting Walt Disney World in December?

We hope this guide has helped you plan your Disney World vacation.

Remember, it’s important to stay flexible and be willing to change plans as closures are announced throughout the year or even evolve throughout the day due to weather or maintenance issues.

If you have any questions, please don’t hesitate to reach out!