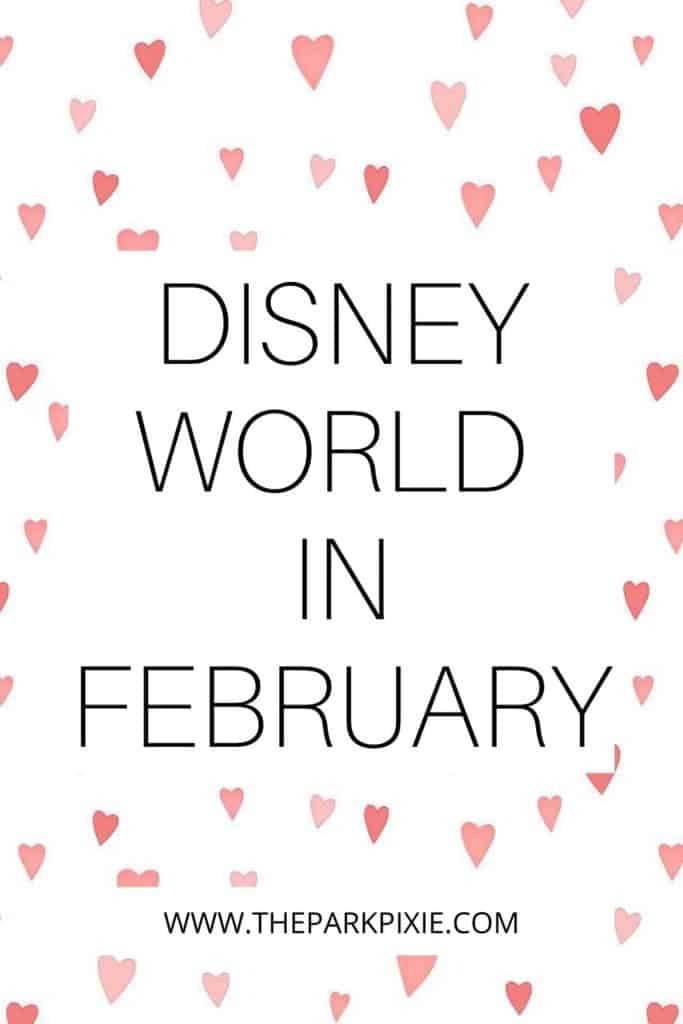 2023 continues with another great month at Disney World.

Whether you aren’t sure when you want to visit or have already booked your trip, this guide will help you sort it all out.

In this post, I’ll go over everything about Disney World in February, such as what to pack, what the crowds are like, special events, and what’s closed.

Weather in Orlando in February

The Orlando area has mild temperatures with an average high of 74° F and low of 55° F (source).

That said, cold snaps can happen, even in Florida!

Another good aspect to the weather in February is that it isn’t as rainy or stormy as other months, with only 2.47 inches of rain on average (source).

Overall, if you’ve avoided visiting Disney World due to fear of hot, humid, or rainy weather, February will be perfect for you!

What to wear to Disney World in February

I recommend packing a mix of outfits for both warm and cold weather this month. Layers will be key, too, as it can be warm during the day, but cold enough for a jacket or sweatshirt at night.

As for shoes – you do you, my friend. I wouldn’t go too overboard and wear stilettos or brand-new shoes that aren’t broken in.

However, you know your feet best, so wear what is most comfortable and supportive for your feet.

In the cooler months like February, I prefer sneakers, but in the warmer months, it’s always flip flops or Birkenstock sandals.

Lastly, I always recommend having sunglasses, sunscreen, and a disposable rain poncho in your park bag.

Even though it is February, you can still get sunburnt and no one likes to be surprised by the rain!

This guide comes with a FREE printable packing list to help you decide what to pack, as well as ensure you don’t forget anything.

There is a lot going on this month!

Walt Disney World continues its 50th anniversary celebration, plus the Epcot International Festival of the Arts continues into month.

The Epcot Festival of the Arts celebrates a variety of art forms with Broadway-style performances, photo booths, art galleries, crafty activities, and of course – tons of fun food and drink.

February also brings in Black History Month, which Disney World honors with its Celebrate Soulfully series of events and offerings.

Activities included a special exhibit about the soul of Jazz at Epcot, limited edition menu items inspired by Black and African cuisines, plus shops featuring Black artists and designers.

Valentine’s Day, Feb. 14, takes place on a Tuesday this year and there’s always some fun menu items, such as cupcakes, available to celebrate.

Ant-Man and the Wasp: Quantumania debuts in movie theaters on February 17, 2023.

While Disney World is limited in which Marvel characters, there’s usually something fun to celebrate the movie releases down at Disney Springs. Think photo-ops, movie props on display, and sometimes special treats.

A lot of US school districts have a weeklong break this week, so crowds definitely pick up!

Immediately after is Mardi Gras on February 21. While Mardi Gras doesn’t have a huge presence at Disney World, you can bet there will be some extra fun, just like Valentine’s Day.

Last up is the Disney Princess Half Marathon weekend which takes place February 23 – 26, 2023.

This fun event includes a 5K, 10K, and half marathon races, plus a 1 hour yoga session in front of Cinderella’s Castle.

In my opinion, unless you’re participating in the race or cheering someone on, I recommend avoiding this weekend if you can!

There are several rides and attractions that are closed in February. As reopening dates are announced, this post will be updated.

The water ride, Kali River Rapids, is closed through mid-March for refurbishment.

At Pandora, the Colors of Mo’Ara face painting station is still closed with no word on when it will return.

Lastly, most of the character meet-and-greets at Animal Kingdom are still on hold. This includes Pocahontas, Russell and Dug, The Lion King characters, such as Timon and Rafiki.

In its place, are “flotillas” or parade float-like boats that cruise along the Discovery River that circles Discovery Island, with these characters riding along.

So you might not be able to get a picture with them or snag their autograph, but at least you can catch a glimpse and give ’em a wave.

At Epcot, the closures mainly include restaurants and shops that have been shuttered for a few years, but expected to return at some point. This includes:

At Disney’s Hollywood Studios, the Citizens of Hollywood show, Jedi Training Academy, Star Wars Launch Bay theater, The Incredibles meet-and-greet at Pixar Place, and The Voyage of the Little Mermaid are all still closed with no opening date announced.

The Neighborhood Bakery in Pixar Place, where you can get the thirst-quenching frozone slushy and other tasty snacks at Hollywood Studios, is also closed.

Lastly, starting February 20, the Rock ‘n’ Roller Coaster featuring Aerosmith will close for refurbishment. It is expected to open later in the Summer.

There are lots of rumors swirling that this might include a slight re-theme, such as a new band, but Disney has not confirmed yet.

There are several attractions and experiences closed at Magic Kingdom in February.

First, Splash Mountain will remain closed until late 2024, when it will reopen as Tiana’s Bayou Adventure.

Enchanted Tales with Belle will reopen on February 19, 2023. Until then, you can meet Princess Belle at this location.

Lastly, there are several other meet-and-greets that have remained shuttered the past few years:

No word yet on when these character meet-and-greets will return, but we hope it will be soon, even if at a new venue!

Keep in mind though, that if the temps drop too low, Blizzard Beach can and does close for safety reasons!

At Disney Springs and the Grand Floridian Resort, the Bibbidi Bobbidi Boutique is still expected to be closed in February. Disney has stated that it will reopen, but hasn’t given a date yet.

The Perfectly Princess Tea Party at the Grand Floridian is also still closed without a reopen date.

Will you visit Disney World in February?

Are you planning to visit Walt Disney World Resort in February or have you done so in the past? Let’s chat in the comments.

For more Disney World vacation planning tips, check out the posts below: