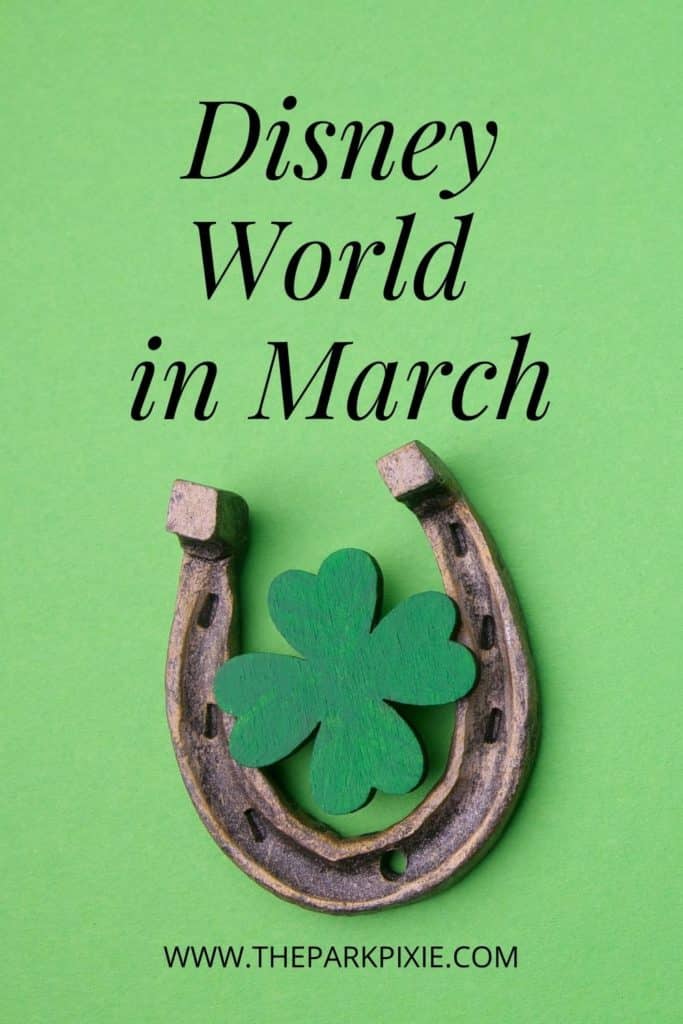 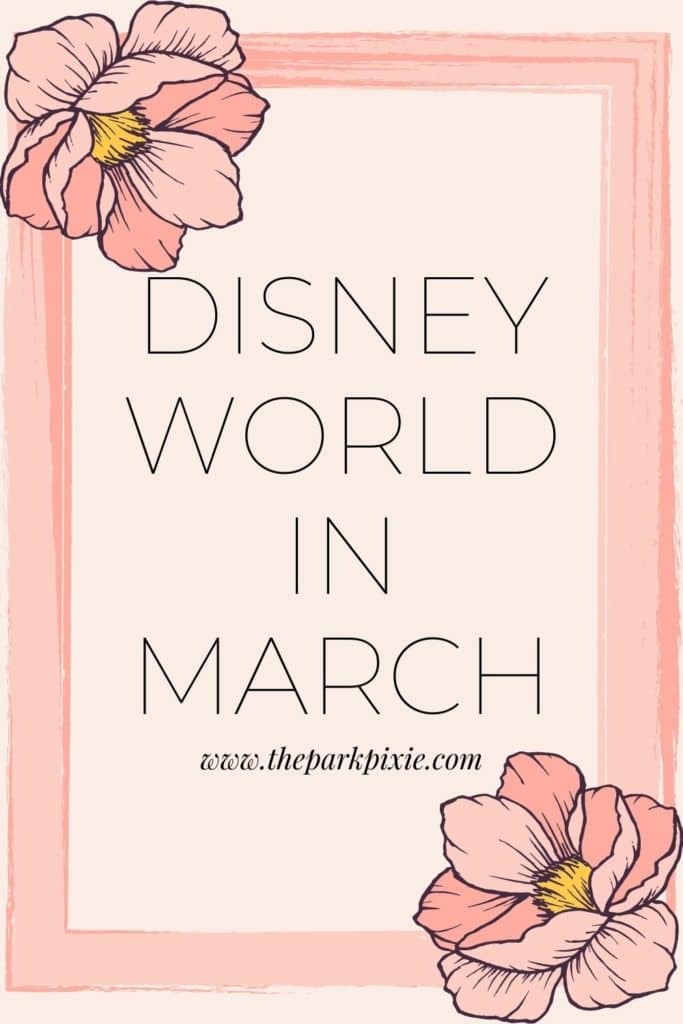 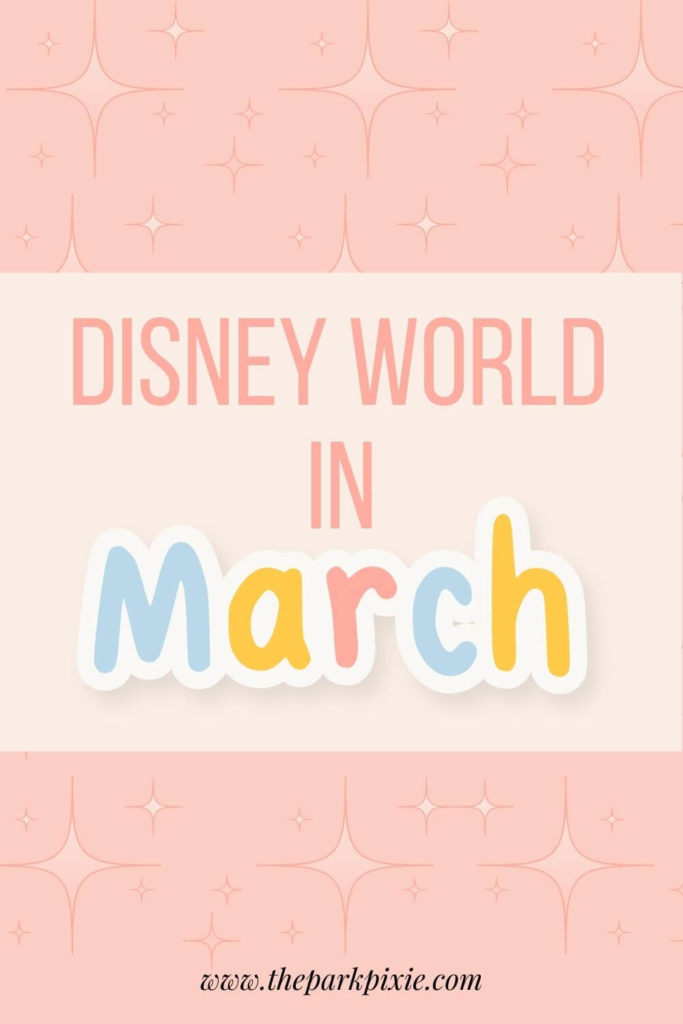 Let’s celebrate the return of Spring with a trip to Walt Disney World in March!

In this post, I’ll go over everything you need to know about visiting Walt Disney World Resort in March, such as weather, what to pack, what the crowds are like, special events, and what’s closed.

How’s the weather in Orlando in March?

March ushers in the Spring season, so just like much of the US, the Orlando area starts to warm up a bit compared to January and February.

Temperatures are an average high of 78° F and low of 56° F. Surprisingly March can be a bit rainy, with an average of 3.77 inches of rain.

Although I suppose that means we’ll see lots of flowers and trees blossoming after the dreary Winter months.

Overall, the weather in the Orlando area in March is mild, making it a good time to visit if you want to avoid the hot and humid months!

Temperature and precipitation data is sourced from Visit Orlando.

What to wear to Disney World in March

At the very least, be sure to pack a jacket or sweatshirt and pants that you can easily mix and match with everything.

As I always say, pack shoes that work for your feet. That doesn’t necessarily mean showing up in 6-inch heels because they’re cute.

But some folks do just fine all day in flip flops while others can’t go without sneakers and orthopedic inserts.

Given the range in temps, it makes sense to pack at least 1 pair of close-toed shoes in case you have a few cool days.

Other than that, always have some sunscreen, sunglasses, and a disposable rain poncho or umbrella in your daily theme park bag. These items will keep you comfortable rain or shine!

My packing guide includes a FREE printable packing list that will help keep you organized and ensure you don’t forget anything important!

The Epcot International Flower & Garden Festival kicks off on March 1.

Look out for new topiaries this year, featuring some of our friends from Encanto, such as Mirabel.

There’s usually some celebration going on at Raglan Road in Disney Springs, as well as at Epcot on St. Patrick’s Day (March 17).

March is also the start of Spring Break season for schools around the US, including K-12 and higher ed.

Lastly, the 50th anniversary celebration for Walt Disney World comes to a close on March 31.

There are several rides and attractions that are closed in March across all four theme parks, as well as other locations and resorts.

As reopening dates are announced, this post will be updated.

Kali River Rapids remains closed through mid-March for refurbishment. The exact opening date is not yet announced as of late January.

Many of the character meet-ups are still on hold at Animal Kingdom, too.

This includes Pocahontas, Russell and Dug from Up, and The Lion King characters. Instead, these characters, and others, float along the Discovery River for paparazzi-like sightings and snaps.

The Colors of Mo’Ara face painting station in Pandora is also closed. Unfortunately Disney has not announced a return date for this attraction, either.

Epcot has several shops and restaurants that are closed in March:

The following Hollywood Studios attractions are closed in March:

The Neighborhood Bakery in Pixar Place remains closed, as does the The Incredibles meet-n-greet.

The Magic Kingdom attractions and experiences closed this month are:

Disney’s Typhoon Lagoon Water Park is closed for refurbishment. It may or may not be reopened by March.

Bibbidi Bobbidi Boutique at Disney Springs and Grand Floridian Resort remains closed. However, Disney has stated that it will reopen, but hasn’t given a date.

1900 Park Fare at Grand Floridian Resort & Spa, including its character breakfast and dinner, is still closed.

Also at the Grand Floridian, The Perfectly Princess Tea Party is also closed.

Are you planning to visit Disney World in March?

Are you planning to visit in March for some springtime fun? Let’s chat in the comments below.

Next up, check out our most popular posts with planning tips:

Lastly, for more monthly guides, check out these posts:

Congrats, your site/blog is awesome and very helpful. Looking for a suggestion. We will be travelling to Florida from Montreal (Canada) and plan to go to Disney. Previously (3 years ago) we spent an entire day at Magic Kingdom and my children were fascinated with the experience. The children are now 10 and 6 years old, so we intend to visit the 3 remaining parks between Feb 28th and March 2 (Epcot, Hollywood studios and Animal Kingdom). We are still undecided about staying on site vs. a "neighboring" hotel that still provides park benefits. Would the order in which we visit the parks make any difference? (meaning is there any benefit to visiting a specific park on Monday over a Tuesday or Wednesday?

Staying at a Disney resort or one of their approved "good neighbor" hotels gives benefits like early entry or extra late hours. The extra hours differ for each park and day, so if you want to take advantage of those extra hours, you could plan your days around that. For example, on Feb 28, Epcot has extra evening hours from 9-11 PM, so depending on when you arrive, Epcot might be a good pick for that day. You can check out the daily schedule here: https://disneyworld.disney.go.com/calendars/five-day/, which will tell you which park has extra morning or evening hours.

Have a great trip! Meg