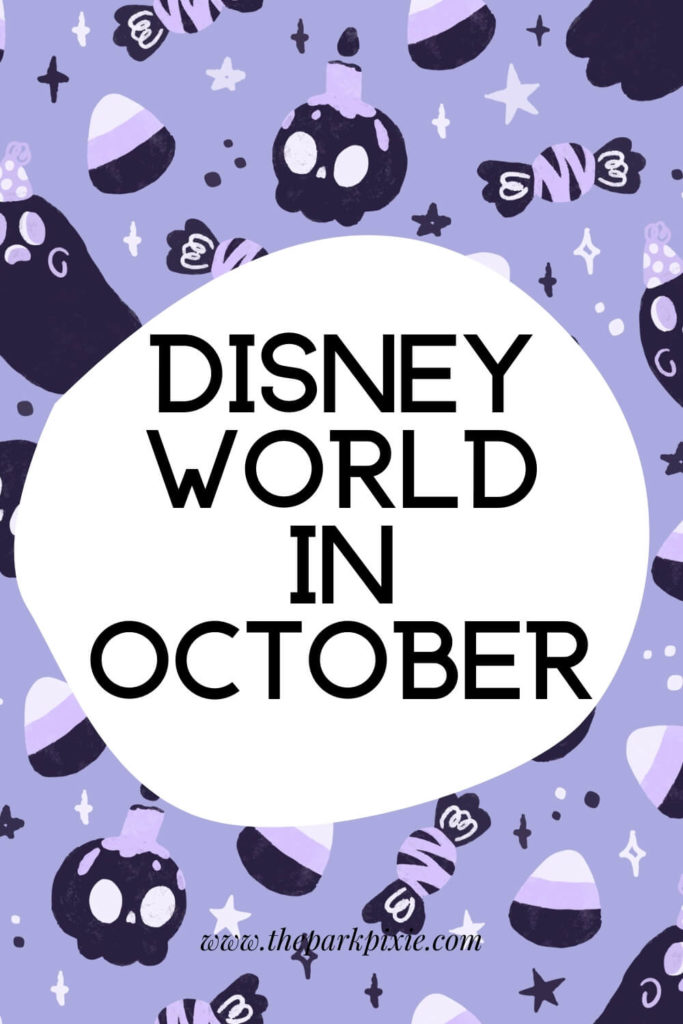 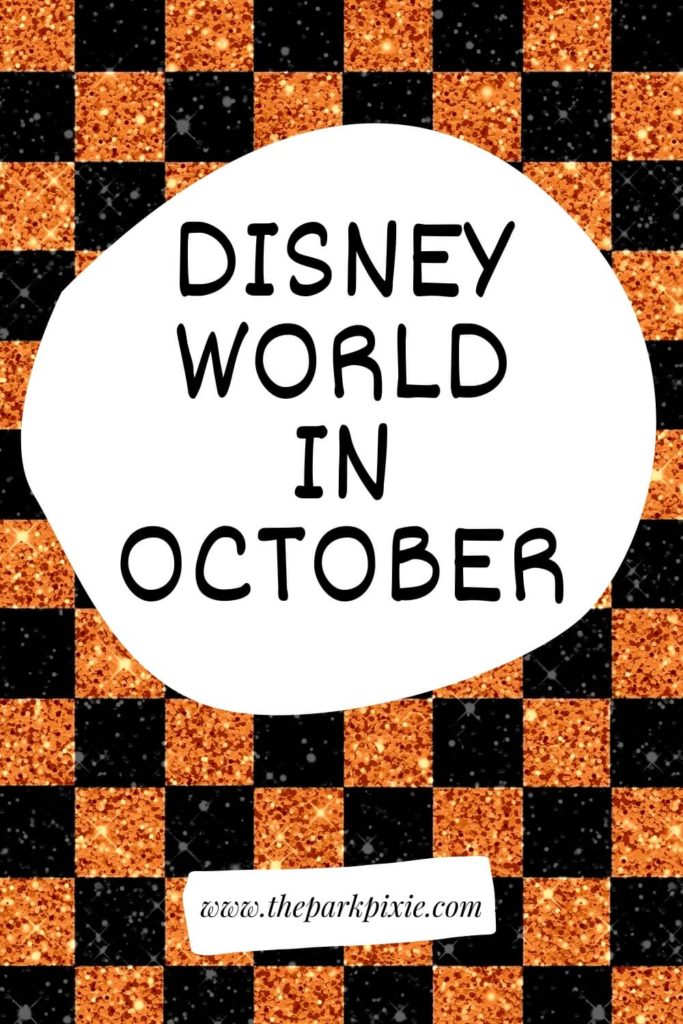 Walt Disney World in October is an excellent time to visit, especially if you adore the Fall season and all the spooky fun that comes with it.

While it’s not peak tourist season, October only has a few pockets with lower crowds. Plus there are plenty of events and Halloween activities to keep everyone entertained.

Whether you’re trying to decide when to visit or have already booked, this guide to Disney World in October has everything covered, from weather and packing tips to events and closures.

This post includes affiliate links. If you click on or make a purchase from an affiliate link, I might earn a commission at no extra cost to you.

Weather in Orlando in October

October ushers in the end of hurricane season for Florida and the rest of the southern US, which means drier weather.

In Orlando in October, the average high temperature is 84℉ and average low is 68℉ with average precipitation at 3.29 inches of rainfall (source).

Compared to just the month before, the average rainfall is nearly 50% less. Nice!

As you can see, it can still get hot in October, so if you want better chances of less hot and humid weather, you may want to visit in the late Fall or Winter months instead.

Now with it still being hurricane season – have no worries! It’s rare for a hurricane to impact the Disney area in a drastic way.

In the event that a hurricane is projected to hit the area, Disney will keep guests safe and entertained in their resorts.

And if you choose to reschedule, Disney will graciously allow you to do so. Airlines and car rental companies usually do the same, too.

What to Wear to Disney World in October

When thinking about what to pack and what to wear to Disney World in October, you’re likely going to end up with a similar list compared to the Summer months.

Pack clothes that are light layers, like tank tops, t-shirts, shorts, and breezy dresses, or whatever it is that you prefer to wear in warm weather.

However, since the evenings can be a bit chilly, I recommend throwing in a light jacket or sweatshirt, maybe even a Disney spirit jersey, in case you get cold.

As for shoes, you know your feet best, so pack what will make your tootsies happy. I usually bring 1-2 pairs of sandals, like Birkenstocks, and 1 pair of canvas sneakers, like Vans slip-ons or Converse low-tops.

I see lots of folks rocking Crocs at Disney World, as well. Personally I’m not a fan of Crocs, but I have heard from many people that they are very comfortable, even at Disney World.

Last, but not least, Halloween costumes! Be sure to pack something fun, but keep in mind that there are strict rules that cast members will follow.

Per Disney’s rules, kids under age 14 can wear costumes to the parks, as long as they follow general guidelines, such as nothing dragging on the ground and no face coverings (except, of course, health masks).

Guests over the age of 14 are not allowed to dress in costumes on regular park visits.

However, guests over the age of 14 can wear costumes when attending Mickey’s Not-So-Scary Halloween Party or the Villains After Hours event.

In addition to the usual dress code rules, if an adult is wearing a costume at one of these events, they cannot pose for photographs or sign autographs.

October has become one of the busiest times of the year at Walt Disney World, with Halloween growing in popularity, resorts offering more discounts, and longer school breaks contributing to a higher number of guests choosing October as the vacation month.

Along with the benefits the fall season brings (like ideal weather and lower crowds), fall offers unique experiences you cannot find any other time of the year at Disney World.

Halloween is well underway throughout the month of October, which is one of our favorite times of year to attend special events at Walt Disney World, such as the Epcot Food and Wine Festival and Mickey’s Not-So-Scary Halloween Party, both of which continue through the end of the month.

If you’re looking to go to Mickey’s Not-So-Scary Halloween Party on or near Halloween, buy your tickets as soon as they go on sale (usually around July) as these dates sell out SUPER quick!

Also keep in mind that the Halloween party only runs on select nights, not every night, as it requires the Magic Kingdom to close early when it runs.

In past years, Disney World has also hosted an event called Villains After Hours at Magic Kingdom, as well. It’s unclear if this event will run in 2023, but let’s hope it does!

Columbus Day weekend is October 6-9, ending on Columbus Day, aka Indigenous Peoples Day. Many schools in the US have school breaks during this time due to the long weekend, resulting in larger crowd levels.

HBCU Week is expected to occur in October, as well, although the dates for 2023 have yet to be announced.

This event includes a college fair, scholarship awards, and learning opportunities in coordination with Disney on the Yard and the HBCU (Historically Black Colleges & Universities) Foundation.

In addition, several HBCU bands perform in parades at Magic Kingdom, as well as the ticketed Battle of the Bands event at the ESPN Sports Complex.

In 2022, HBCU week ran from October 7-9. Given that it coincided with Columbus Day weekend in previous years, my guess is it will again this year.

Lastly, Halloween falls on Tuesday, October 31. If you’re not able to visit WDW on Halloween, check out my post about the best Halloween movies and shows on Disney+, such as Hocus Pocus 1 & 2, for some at-home Disney fun.

As soon as Halloween passes, Christmas time is quickly ushered in at Walt Disney World resort, with many of the resorts and theme parks decorating as soon as the first week of November.

There should be minimal closures at Disney World in October. Although as I write this, it’s January 2023, so it’s possible more will be announced between now and then!

At Animal Kingdom, most of the in-person character meet-and-greets are still on hold.

For the time being, many characters make surprise visits on boats that sail the Discovery River around Discovery Island.

Lastly, the face painting station in Pandora, Colors of Mo’Ara, will likely still be closed.

A handful of shops and restaurants at Epcot have been closed for some time now, with no opening date announced.

The shops and restaurants that are closed are:

In addition, Village Traders between the China and Germany pavilions and the Trading Post between Canada and the United Kingdom pavilions will also likely be closed in October.

There are several shops and attractions that have been closed at Hollywood Studios for quite a while, but still expected to reopen at some point in the future.

Disney hasn’t announced them as permanently closed, but they also haven’t stated when they’ll reopen. So it’s very possible that some or all will still be closed in October.

The impacted shops and attractions include:

Despite so many closures at Hollywood Studios, there’s still tons to do, so it is still worth a visit in my opinion.

Star Wars fans are surely bummed about the Jedi Training Academy, and the Star Wars Launch Bay theater, where the behind-the-scenes film is show, still being closed.

There are multiple closures expected at Magic Kingdom in October. This includes:

Bibbidi Bobbidi Boutique in Disney Springs is closed for refurbishment until further notice.

Will you visit Walt Disney World in October?

Visiting Disney World in October can be a great time for fewer crowds and a variety of Halloween and Fall activities.

Many of the parks are less crowded than they are during the Summer, although beware of surges near Columbus Day weekend and Halloween.

We hope this Disney World in October planning guide has helped you make the most of your time at Walt Disney World. If you have any questions, please leave them in the comments below!