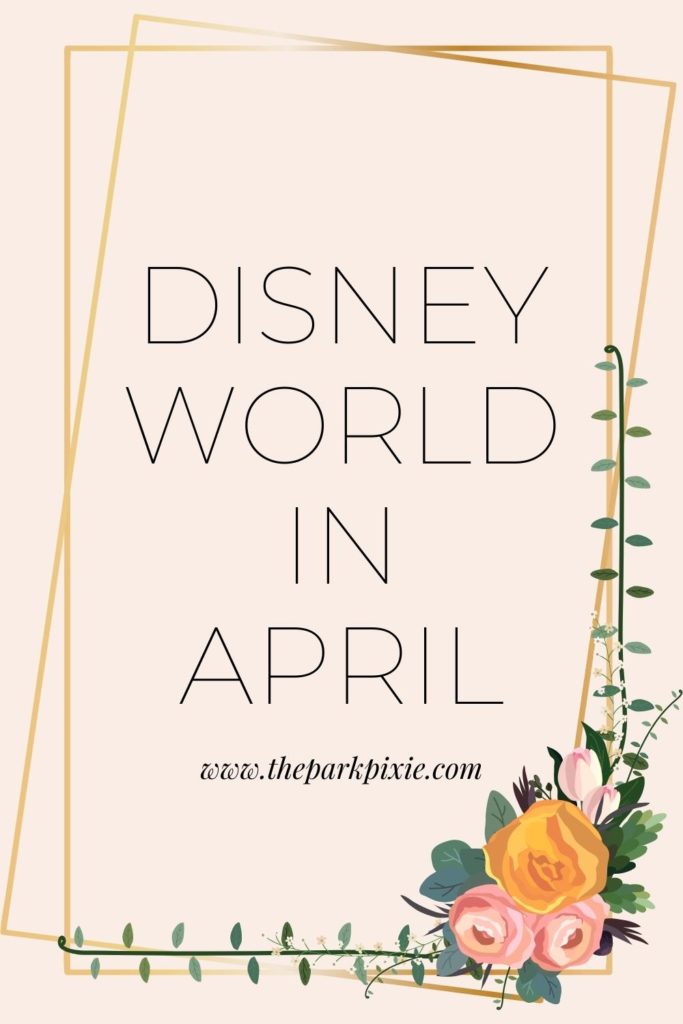 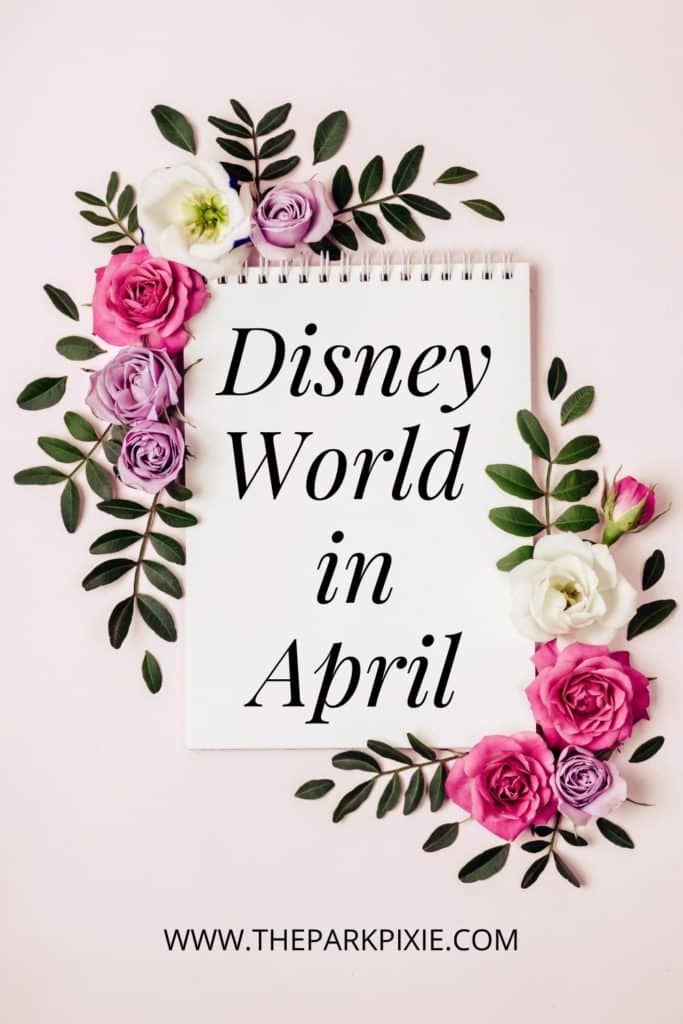 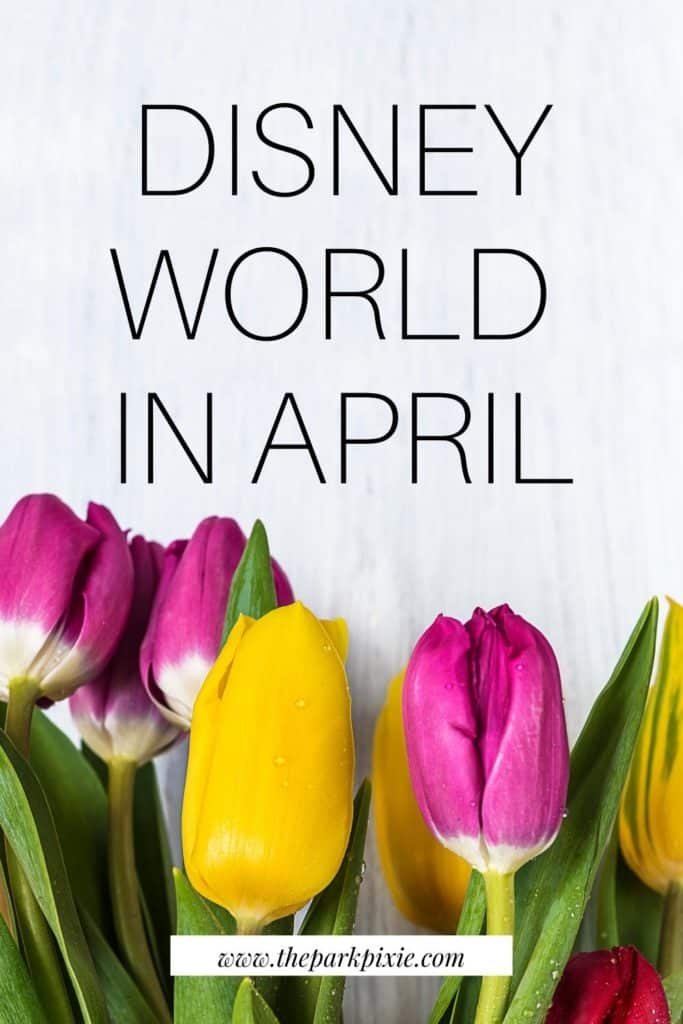 Disney World in April is another great time to visit thanks to great weather.

But more importantly, TRON Lightcycle / Run debuts at Magic Kingdom, plus the Happily Ever After fireworks show at Magic Kingdom and EPCOT Forever nighttime show both return in April.

In this post, I’ll share tips for planning your trip to Disney World in April, including what to pack, what the crowds are like, special events, what’s new, what’s closed, and general weather info.

Weather in Orlando in April

The average temperatures continue to warm up in April with an average high of 83° F and low of 60°.

While it does rain in April, the average precipitation is only 2.68 inches of rain, which isn’t all too bad.

Overall, the weather in Orlando in April is quite nice – not too rainy and great temperatures for a pool day or 2.

What to wear to Disney World in April

For the most part, cool layers will be your best bet on what to wear to Disney World in April.

While it won’t be as hot and humid as it is in the Summer months, the temperatures can get into the 80s.

Keep an eye on the forecast and at the very least, throw in a sweatshirt or light jacket and a pair of pants just in case.

Per usual, pack the shoes that work best for you, whether that be sandals or sneakers.

That said, I don’t recommend wearing heels to the parks, unless you’ll only be there for a short time, such as for a dinner reservation.

Otherwise, you can really hurt yourself – and no one wants to be laid up in their hotel room because their feet hurt too much!

At minimum, make sure you have plenty of sunscreen, a pair of sunglasses, and a compact rain poncho or umbrella in your park bag. These will help you beat the sun and rain.

For more tips on what to pack for Disney World, check out my Disney World packing list, which includes a FREE printable list to help you stay organized while you pack for your trip.

Starting with April 3, the Happily Ever After fireworks show at Magic Kingdom and EPCOT Forever nighttime show both return, having been temporarily retired to make way for shows put together for Disney World’s 50th anniversary. Happily Ever After will include some updates, such as new projections.

Next up, the TRON: Lightcycle / Run roller coaster is set to open on April 4 – Finally!

This roller coaster was first announced in July 2017 at the D23 Expo. And now, nearly 5 years later, we’ll finally get to ride this popular coaster, which originally debuted at Shanghai Disneyland in 2016.

Aside from that exciting Magic Kingdom news, the Epcot Flower & Garden Festival continues into April. I can’t wait for the Garden Rocks concert series and yummy food booths. How about you?

April is also when most K-12 schools have Spring Break, plus Easter is April 9, so you’ll likely see lots of families with kids visiting during April.

There are several rides and attractions that are closed in April. As reopening dates are announced, this post will be updated.

At Animal Kingdom, the bulk of closures involve character meet-and-greets that will hopefully return soon.

Until then, you can see most of the characters on floats that sail the Discovery River that runs around Discovery Island.

In addition, the Colors of Mo’Ara face painting station will likely be closed. It has been closed for some time now, with no reopening date announced.

The following shops and restaurants are closed in April:

As of publication date, an opening date for these attractions and restaurants has not been announced.

There are several character meet-n-greets that may still be closed at this time:

In addition, Splash Mountain is closed permanently, but will reopen as Tiana’s Bayou Adventure in late 2024.

Disney’s Typhoon Lagoon Water Park is currently closed for refurbishment. It may or may not be reopened by April.

At the Grand Floridian Resort & Spa, 1900 Park Fare, including its character breakfast and dinner, and The Perfectly Princess Tea Party are both closed.

Will you visit Disney World in April?

Are you planning to visit Disney World in April for some springtime fun? Let’s chat in the comments below.

Next up, check out more of our Disney World tips: