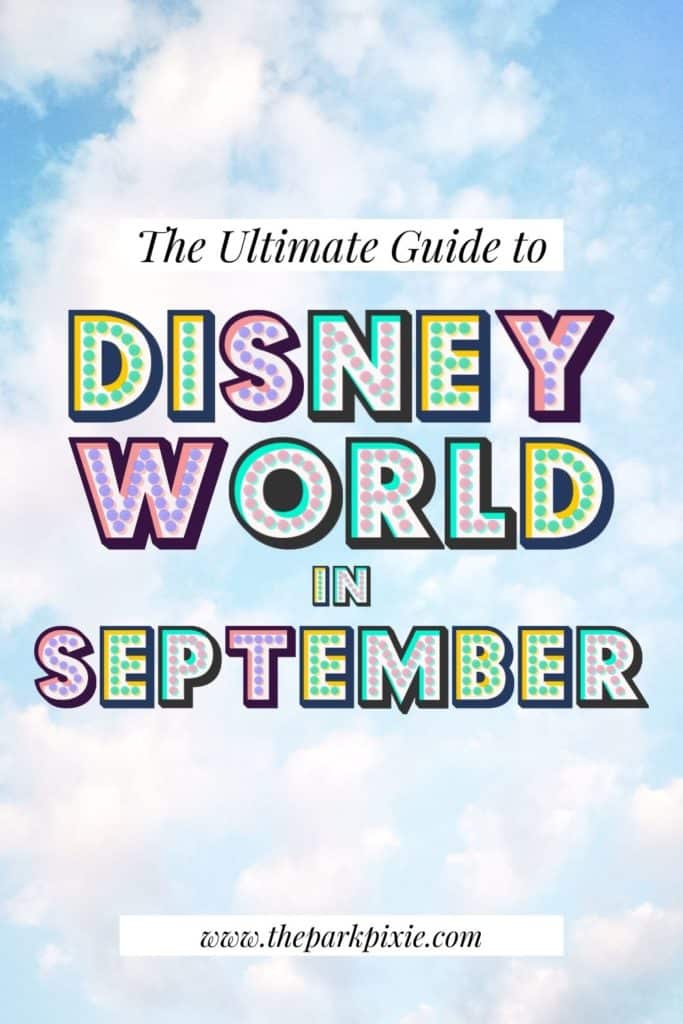 If you’re thinking of visiting Walt Disney World resort in September or you’ve already booked your trip, use this monthly guide to plan your itinerary.

In this post, I’ll go over everything you need to know about Disney World in September, such as what to expect with the weather, special events to consider, what the crowds are like, what’s new, and what’s closed.

Weather in Orlando in September

The Orlando area in September is just as hot, humid, and rainy as it is in July and August.

According to US Climate Data, the average high temperature is 89° F and average low is 74° F.

So, in other words, the weather in Orlando in September is still hot and sticky this time of year.

While that doesn’t mean Disney World will get hit with a hurricane, which is rare due to its central location inland, it does mean rain – lots of it.

September is one of the wettest months in the Orlando area with an average of 6.02 inches of rain (source).

Late afternoon rain showers are common, though they often only last about 20 minutes, give or take.

What to wear to Disney World in September

As with the other Summer months, I recommend light-colored, loose clothes to help prevent you from overheating.

As for shoes, I always say do what’s best for your feet. I prefer sandals, like Birkenstock slides, rather than sneakers, because I HATE when my feet get hot and sweaty.

But, many people feel they can’t keep up with all the walking unless they wear sneakers.

At the end of the day, you know your feet best, so wear what will keep your feet comfortable and supported.

As for what to bring into the parks with you, I highly recommend taking sunglasses, sunscreen, and a disposable rain poncho.

The Florida sun can be brutal, as can the rain, so it’s a good idea to be prepared for both!

For more tips on what to pack for Disney World, check out my Disney World packing list post.

My Disney World packing guide comes with a FREE printable packing list to help you stay organized while packing for your trip.

Yes – there are a few events and holidays in September that might affect crowds and attractions at Disney World.

The month kicks off with Labor Day weekend, the first weekend in September.

The Epcot International Food and Wine Festival continues through the entire month.

You can catch more details about this delicious festival in my Epcot Food and Wine Festival guide.

The Halloween party dates are not yet available as of January 20, 2023.

September is quite nice crowd-wise.

As schools are either mid-session or just starting, most guests at Disney World are either adults, locals, or families with children under 5.

The beginning of the month is slightly busier, the late September has smaller crowds.

If you’re a fan of Halloween, September is a great time to visit Disney World for special events, such as Mickey’s Not-so-Scary Halloween Party, as well.

The special-ticketed events for Halloween are less likely to sell out too quickly compared to events closer to October 31, so be sure to buy yours quickly to avoid being left out.

There are several rides and attractions expected to be closed in September at Disney World.

This section is continuously updated as new announcements are made about ride and attraction closures, so be sure to check back close to your travel dates in September!

Character flotillas, or boats that look like parade floats, have replaced many of the in-person character meet-and-greets at Disney’s Animal Kingdom.

It’s not clear if this is permanent or if they will return.

The Colors of Mo’Ara face painting station in Pandora is also still closed with no reopening date.

At Epcot, there’s a possibility that several shops and restaurants will still be closed in September:

Over in the Morocco pavilion, The Brass Bazaar, Casablanca Carpets, Marketplace in the Medina, and Restaurant Marrakesh will likely also still be closed when September rolls around.

There are a number of shows and attractions at Hollywood Studios that may be closed in September:

In addition, the following shops and food stands are closed:

No dates have been announced regarding when any of these rides, attractions, shops, or food carts will reopen.

Several attractions at Magic Kingdom are closed with no reopening date announced as of January 18, 2023.

And if you haven’t heard the news yet, Splash Mountain is permanently closed. In it’s place will be a similar ride, Tiana’s Bayou Adventure, which is expected to open sometime in late 2024.

Are you ready to visit Walt Disney World in September?

I’ve visited Disney World in September in the past and despite the high temperatures, the crowds were more manageable than other times of the year, which in turn made it a good experience.

I’d definitely visit during this time of the year again!

Are you planning to visit in September or have you done so in the past? Let’s chat in the comments.

Next up, check out more of our Disney vacation planning guides: