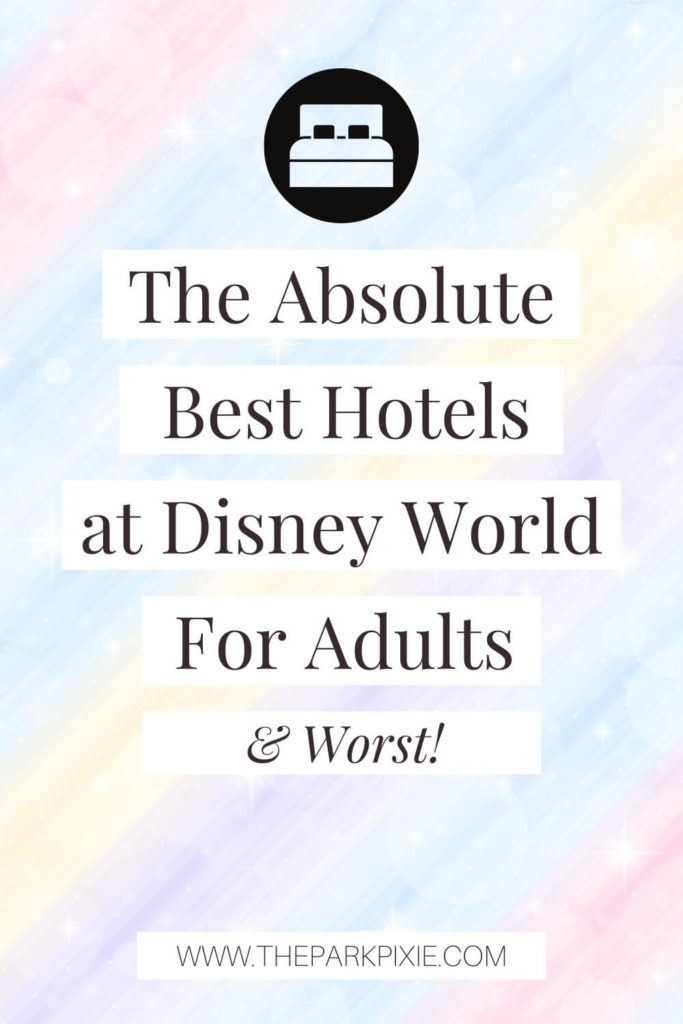 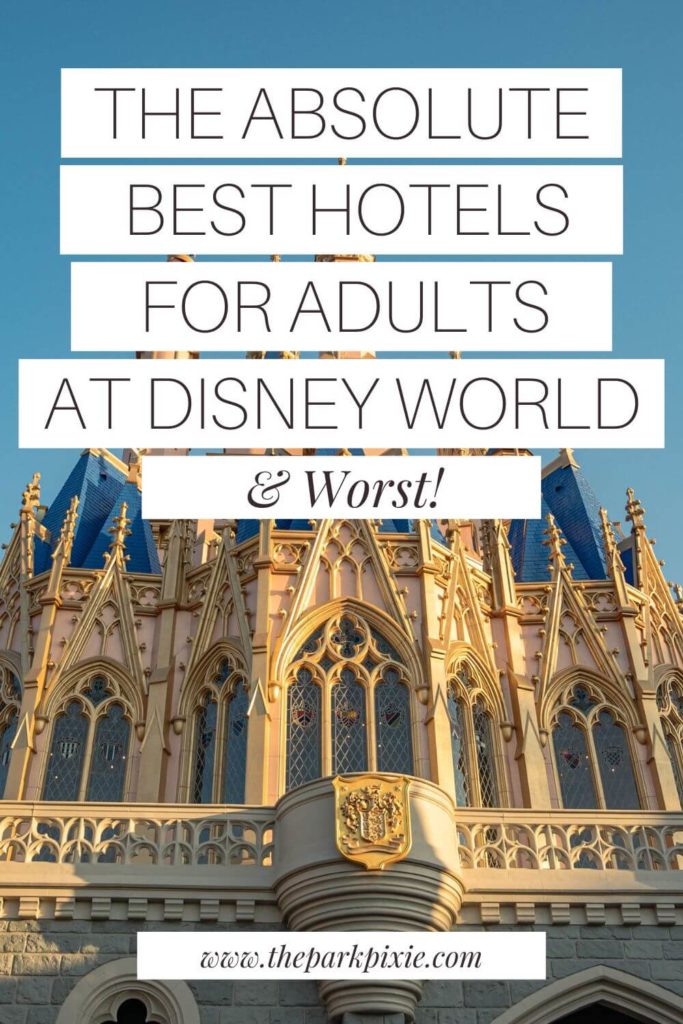 So you’re planning a trip to Disney World for adults only? Well you’ve come to the right place!

In this post, I share my opinion on the best Disney resorts for adults – and the worst.

Whether you’re visiting Disney World for your honeymoon, anniversary retirement, a milestone birthday, or just because, picking the right resort is crucial!

For an adults-only trip, you might want a bit of luxury, an easy commute to your favorite park, signature dining, or something just a little bit more than just a place to rest your head at night.

Keep reading for the best Disney resorts for adults – and the worst, too!

Ratings are exclusive as to whether the resort is good for an adults-only trip.

Sure, most of the deluxe and moderate resorts have tons of amenities for adults, but not everyone can or wants to plunk down the money for them! I totally get that!

That’s where Disney’s Pop Century Resort comes in. This value resort opened in 2003 and features several groups of buildings, each themed after a decade between the 1950s and 1990s.

In addition to the fun, retro theming, there are several quiet pools, perfect for an afternoon of cooling off in the pool or reading poolside, sans-noisy kids.

To top it all off, Pop Century is one of the Disney Skyliner resorts, enabling quick access to Hollywood Studios and Epcot, as well as dining options at Riviera Resort and Caribbean Resort.

Pick this resort if: you’re visiting Disney World on a budget, want Skyliner access to Epcot and Hollywood Studios, enjoy a retro theme, or want a quiet pool day.

When it comes to moderate resorts at Disney World, my vote for the best pick for an adults-only trip is Portal Orleans – French Quarter.

I’m not a huge fan of their pool. It’s not horrible, but it’s a bit outdated and needs a makeover. So if a pool day is on your agenda, this might not be the best pick for you.

Other than that, it is home to the Scat Cat Lounge, a jazz lounge that is sure to be a hit for many adults. It’s also Mardi Gras themed, complete with New Orleans-inspired cuisine at their quick service restaurant.

Pick this resort if: you love Jazz music, want a step up from value resorts, or love New Orleans and Mardi Gras!

In 2000, the resort was expanded to include the DVC property, Boulder Ridge Villas. Disney is reportedly working on overwater cabins for Boulder Ridge, as well.

In 2017, they introduced the Copper Creek Cabins which sit along the waterfront, but don’t extend over the water.

Pick this resort if: you love the great outdoors, want easy access to Magic Kingdom via ferry, or enjoy staying in cabins.

Disney’s Contemporary Resort is within walking distance to Magic Kingdom and the first stop on the monorail after MK.

It is also one of 2 Disney resorts that opened alongside Magic Kingdom, the first Disney World park, on October 1, 1971.

This deluxe level resort is undergoing a refresh, with some rooms getting The Incredibles themed rooms and others a character-less modern theme.

Aside from ridiculously easy access to the Magic Kingdom, another draw for adults at Disney’s Contemporary Resort are the California Grill, one of the best spots to view Magic Kingdom’s fireworks, and Steakhouse 71.

But, for the kid in you, there’s also Chef Mickey’s character dining, too!

And let’s not forget – since it’s on the monorail, you’ll be able to get to Disney’s Polynesian Village Resort and Grand Floridian Resort & Spa super easy!

In 2013, it added Disney Vacation Club villas with Dumbo and Mary Poppins themed rooms, with plans to add more in 2022.

The resort overall is also undergoing a refurbishment to modernize its interior, with guest rooms and the lobby included.

Located on property is Disney’s Wedding Pavilion, making it a popular choice for those who dream of a Disney wedding, elopement, or vow renewal.

Pick this resort if: you’re getting married, eloping, or renewing vows at Disney’s Wedding pavilion, you want access to the Magic Kingdom or Epcot via monorail, or want a spa day.

Despite the name, the Walt Disney World Swan and Dolphin hotels are not official Disney hotels.

This is a massive reason why I think they are some of the best Disney resorts for adults!

Aside from being the perfect pick for travel hackers, these deluxe resorts are located right in between Epcot and Hollywood Studios. They are also a quick ferry ride away from the BoardWalk.

Pick this resort if: you want to earn or redeem Marriott Bonvoy rewards or want easy access to Epcot, Hollywood Studios, and the BoardWalk entertainment district.

Perhaps the biggest draw to Disney’s Animal Kingdom Lodge are its savanna view rooms, where the room balconies overlook the savanna from the adjacent Animal Kingdom theme park.

Many animals, such as giraffes, wildebeests, and zebras roam freely in this area, making it a unique memory.

In addition to its savanna rooms, Disney’s Animal Kingdom Lodge is home to several lounges and restaurants, such as Cape Town Lounge and Wine Bar, Boma – Flavors of Africa, and Sanaa that adults will undoubtedly enjoy. It is also home to Jiko – The Cooking Place, a signature dining restaurant.

Pick this resort if: you want a safari-like getaway, quick access to Disney’s Animal Kingdom theme park, or enjoy African, Indian, and other similar cuisines.

While not an official Disney resort, the Four Seasons Resort Orlando is what Disney refers to as a “good neighbor” hotel.

Hotels with this designation often get some of the same perks that guests would get if they stay at an official Disney resort.

The Four Seasons Resort Orlando is ridiculously luxurious – even more so than any of the official Disney resorts at Disney World. So if luxury is what you’re after, definitely consider it!

Aside from the luxury, the Four Seasons Resort Orlando is also a great pick for adults thanks to its adults-only pool and on-site golf course.

Pick this resort if: you want adults-only pool time, want to golf during your vacay, are an American Express travel credit card user, or are a Four Seasons Elite member.

Another one of the best Disney resorts for adults is Disney’s Polynesian Village Resort. It is the second of 2 resorts that opened with Magic Kingdom on October 1, 1971.

The overwater bungalows are to die for and one of the ultimate bucket list experiences at Disney World. They’re perfect for celebratory vacations, such as honeymoons, milestone birthday tips, and retirement celebrations.

In 2022, Disney announced plans to add a new building for more villas, as well as restaurants and other activities in place of the now shuttered Spirit of Aloha dinner show. I can’t wait to see what they’ll add!

On the backside of the resort is the Seven Seas Lagoon, complete with a beach for lounging and relaxing during the day or catching the fireworks at night. It is not for swimming, though.

Adults will love Trader Sam’s Tiki Terrace and Trader Grog Grotto, plus the Pineapple Lanai for the daily nutritional requirement of at least 1 pineapple Dole Whip per day. There’s also ‘Ohana, one of my favorite character dining locations at Disney World.

Pick this resort if: you’ve got cash to drop on overwater bungalows, want to watch the fireworks from the beach, love all things Moana, are a massive Dole Whip fan, or just enjoy a tropical theme in general.

Hands down, one of my favorite Disney resorts for adults are the Yacht & Beach Club Resorts.

While technically 2 separate resorts, they sit next door to each other and share the 3-acre Stormalong Bay sand-bottom pool and lazy river.

In addition to its fancy pool, the Yacht & Beach Club Resorts are located within walking distance to Epcot, as well as the BoardWalk entertainment area.

Pick this resort if: you want pool days, walking access to Epcot and nighttime entertainment at the BoardWalk.

In my opinion, none of the Disney resorts are bad, per se, but they can make or break your vacation. So when it comes to an adults-only trip, I recommend not staying at one of these resorts.

Ratings are exclusive as to whether they are good for an adults-only trip.

The cheapest resorts at Disney World are the All-Star Movie, All-Star Music, and All-Star Sports Resorts.

These resorts are super popular with families, especially those that need more than 1 room.

And while saving money is great (as are kiddos), sometimes on an adults-only trip, we want a little more luxury and a quieter atmosphere.

Another value resort to skip for adults-only vacays at Disney World is Disney’s Art of Animation Resort.

This resort was specifically designed with families in mind, so it is kiddo-central – especially at the pool.

I will say, their quick service restaurant and souvenir shop is pretty good, plus the animator sketches throughout the resort are really cool to see.

However, it is also connected to the Pop Century Resort via a short bridge, so you can always hop over for a meal and check things out without having to stay there.

While the location is excellent for adults who want quick access to Epcot or evenings on the BoardWalk, it’s subpar compared to other moderate and deluxe options available.

Plus there’s a giant clown slide at the pool, which frankly creeps me out.

If this resort were ever refurbished (especially the pool), I might reconsider. But for now – there are better Disney resorts for adults to choose from!

So if your budget allows, skip these resorts for an adults-only trip.

Which resorts do you think are the best for adults?

Drop your Disney resort recommendations in the comments below.